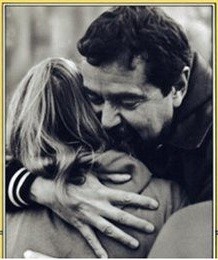 “Life is a banquet and most poor suckers are starving to death.”
–Mame Dennis, “Auntie Mame”

Leo Buscaglia was an author and an educator in the field of Special Education. He taught at USC and spoke publicly. Some of his lectures have been compiled in book form, “Living, Loving and Learning.” He also wrote several books on loving. It was his central credo, love. He had an amazing way of speaking the Tao of love and actually coming across. At the end of his public engagements he would make himself available for people who wanted hugs, an amazing man. If you’re feeling dysfunctional, feeling bad about yourself or others, I can’t think of a better remedy than to immerse yourself in the writings of Leo Buscaglia. He was a master of love.

So what Sun sign was the master of love? Would it surprise you to learn that he was an Aries? Aries gets called arrogant or self-involved. Buscaglia certainly was an individual who lived his self fully, appreciated himself fully as he appreciated life in general fully. Aries is martial. Buscaglia was militant in spreading the idea that everyone needs and deserves and is capable of love!

I’m sure it’s less surprising to hear he had a Pisces Moon. Loving everyone as a divine ideal is one possibility for a Pisces Moon, loving everyone due the feeling that we are all connected. His Moon was part of a grand trine with Pluto and Saturn; he was a powerful, higher-love teacher. You could also say he was an active preacher for love with his Sagittarius rising with Jupiter conjunct, trining his Aries Sun, Mercury and Chiron.

What I found most surprising about Buscaglia’s chart was his lightly aspected Venus. It is well-placed in Taurus and there’s no better example of Venus in Taurus to my mind. He was the earthy, get down in the dirt and enjoy life lover (how he described himself as a person) you’d expect from this placement at its best. His Venus widely squares Neptune and that definitely shows in his idealism and ability to give the world the benefit of the doubt. His Venus’ closest aspects, however, are its trine to the midheaven and sextile to Ceres on the IC. He was the soul of nurturing and talked often of the role his loud, loving, economically poor, immigrant family had in forming his life’s path. Clearly it connected well to his Taurus aesthetic and in turn fueled his career.

It is interesting that this love expert never married and I never heard of anyone being romantically linked to Buscaglia. Something interesting of note with this fact is his Sagittarius ascendant with Jupiter conjunct. Sagittarius, though many do marry, is known as the bachelor of the zodiac. Jupiter conjunct makes for sort of a super bachelor in this case. He loved the masses and they loved him back.

Is it clear that I adore him? I suspect so. Who is your own icon of love?