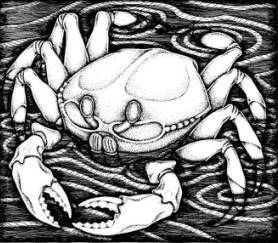 I met a Sagittarius man on a cruise I took. He works on the cruise ship, and I found myself really attracted to his fun and outgoing personality. I was the one that initiated the flirting with him, and then he started flirting back with me. Nothing major, mostly smiling at each other, laughing with each other, I would catch him looking at me…that sort of innocent flirting.

He’s 35 and has never been married because he says he likes staying busy and traveling and that’s what the cruise lifestyle offers him. When I talked to him during the cruise, he seemed very nice & genuine. He was never inappropriate with me. On the last day of the cruise, I wrote him a note on his tip envelope along with my email address. I’ve never done that before, because well being a Cancer, that’s just not my style. I didn’t think he would email me back, but he did.

Now we’ve been emailing back and forth for a month. He’s told me basic stuff about himself, but he hasn’t really opened up to me. He doesn’t ask a lot of things about me either. We mostly just kind of joke around, talk about travels, and sometimes flirt a little. He says he never keeps in touch with other guests, but that he liked what I wrote to him. He says he likes me and likes getting my emails.

I know Sagittarians don’t like to be tied down, and this being a long distance relationship….well that is never easy. Comparing our sun signs, Cancer & Sagittarius…well it seems we are just so different & not compatible. However, I have a Sagittarius ascendant (sometimes I’ve been told I have a Scorpio ascendant, but I identify more with Sagittarius). I love to travel, I love to laugh and joke around, I get bored easily with people and things if they don’t keep my interest. I love my independence and like doing my own thing. I’m not the typical needy Cancer. Yes I want men to tell me they love me, but I don’t need to hear it constantly. I prefer them to show me that they love me. I don’t fall in love with men easily. In fact…I don’t even think about marriage unless family/friends bring it up, I don’t really yearn for responsibility (that’s why I’m not married and have no children). As a Cancer, yes I do want to get married & eventually have kids, but it’s not on the top of my priority list. But ever since I met him, I’ve felt like we could be great and have fun traveling together.

Could he could be the one that I didn’t know I was looking for? (lol)

I’d say the odds you have a future with this man are virtually non-existent and I base this not only on your chart, but on your email but also on the fact I happen to know quite a bit about the cruise industry. And these are facts:

Who quits their job for someone they chatted with on a 1 week cruise? Especially when if they stay put each and every week there is another sea of fresh faces boarding? Never mind he is a Sagittarius with his Sun conjunct Jupiter and Neptune!

This man is interested in freedom, expansion, pining and fantasy and decidedly disinterested in the restrictions that are part and parcel of a grounded relationship. That’s why he’s working on a cruise ship!

So what do you want? Do you want to be in love with a guy on a ship? If so, go right ahead. But is he going to join you in your quest? Highly doubt it and one more thing.

You are in fact a Scorpio rising. You relate to Sagittarius because your Sun and Moon are in the 9th house (the Sagittarius house), but here is what concerns me:

You’re trying very hard to be convincing – you’re no Cancer! However you are a double Cancer with Mercury in Cancer so what do you think that’s about, hmm? I think you may be in a bit of denial here.

Live your Sun, satisfy your Moon. Your Sun and Moon in Cancer that is.