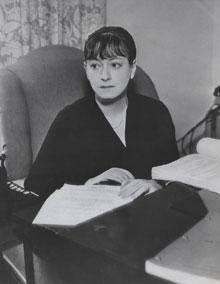 Dorothy Parker is one of my all-time favorite writers but I rarely quote her anymore. Someone must have passed a memo and I get put on suicide watch if I do. I never looked at her chart before today but it hits mine in all the right/wrong places. Her writing feels divine, like cleaning your ears with a q-tip, or probing sore gums with your tongue. She was bright, acerbic, supremely talented and she knew how to cut a bitch, but with a knife so sharp and precise it was art. “This is not a novel to be tossed aside lightly. It should be thrown with great force.”

Her Capricorn Moon (which is painful on its own) received hard aspects from most of the planets and was the focus of most of the energies in her chart. With everything but the Moon below the horizon, Dorothy Parker wore her heart on her sleeve. Venus near Saturn squaring her Moon meant she had to work for love, and it was a struggle to get what she wanted or want what she got. With Venus trining Jupiter, though, she had big love. The Sun in Virgo conjunct Mars trined her beleaguered Moon; she never gave up. With a Capricorn Midheaven she achieved acclaim and success, but she worked for it.

As a writer her Mercury is of great importance. Deep at the bottom of her chart in Leo, it is her best aspected planet, taking sextiles from Saturn, Neptune and Pluto. In quincunx to her Moon it leant a periodic respite from her pain, a way out.

Dorothy Parker was fierce. I like to share her around as I think she gave pain a voice of power. I’m pretty sure I got one of my own coping mechanisms from her writing, “it could be worse…” She was the ultimate hidden optimist: she talked of death but kept on living.

Resumé
by Dorothy Parker
Razors pain you; Rivers are damp;
Acids stain you; And drugs cause cramp.
Guns aren’t lawful; Nooses give;
Gas smells awful; You might as well live.

Who are your heros? Have you looked at their charts?