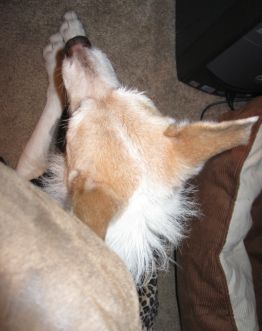 We got the results of Dora’s 2nd blood test back. Her clotting is fine. The doc said that cancer in her eye or a tumor is the most likely cause of the problem. I asked if it could be caused by trauma (she walked into a door). This has been the hope but the doc said it was unlikely.

Dora is comfortable, eating normally and just in general, she is her regular Dora self so it is pretty hard to believe she is dying. She runs down the hall, bouncing like a teen. The soldier tells her not to do that because she is an old lady but she’s got no idea.

I am similar and to that the soldier says, “I guess a man only likes one kind of girl.”

The picture is of Dora lying next to me as she is prone to do. The brown on left side of the picture is edge of my chair. On her right side is the bed I got her which she refuses to sleep in though I’m told she used to love them in the past.

As you can see, she is inches away from me all day and I have no idea what I am going to do without this dog. I cannot be convinced she is dying because she’s just too bouncy. I guess it’s possible she bounces right into her grave, I have always wanted that myself.

In my dreams I die when hit by a train, wearing headphones and singing off key. I hope Dora is so lucky to not know what hit her because right now the only thing she doesn’t like is going to the doc an being put through the ringer.

The soldier wants to be left alone to die. He wants me to keep everyone away so he can die in peace. He wants to just be left to lie in bed and dream and this is what Dora does in between bouncing. Cancer or no, she’s seems really happy and peaceful.

When she got off the plane after flying across the country to join the soldier, I knew she was coming here to die. I just hope it’s not that soon.