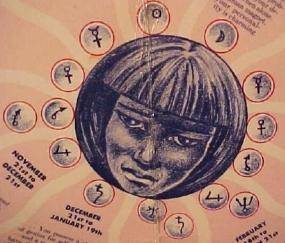 What’s the first thing you pick up on when you meet someone, astrologically speaking?

The textbook answer is the rising sign, but in practice that’s not always the case. The rising is what we put out for other people to see, it isn’t necessarily what get’s noticed first though.

I have noticed that different people are observant of different parts of the chart. Example, I see moon signs. When I meet someone new, as I am sussing them out I start to pick up on qualities that I later find out belong to their moon. I’ll ask someone “What’s your sign?” and they’ll come back with “Guess?” So I guess “Capricorn?” “No, I’m a Gemini.” So, eventually we look it up and BAM! Cap moon!

My Mom is straight up good at guessing the Sun. Sometimes I forget this and during the Winter Olympics we had an argument, like an actual argument over whether or not Johhny Weir was a Cancer or a Leo.
“Mom! That Tassel! It’s a hot pink tassel! He’s gotta be a Leo.”

So, during the commercial we looked it up: Cancer Sun, Leo Moon.

I tried to tell her we were both right but she had lost interest at that point. She’s a shiny chicken.

So, I’ve had this idea in the back of my mind for a while. I’m thinking its just a yin/yang-Sun/Moon thing. Until…

I’m sitting at a table being psychoanalyzed as part of a game. You remember that Scorpio guy from my class, right? Well, I’ve seen the charts of myself and two other people at the table and I start to notice a trend.

Cherie has Mars conjunct the MC. I have Chiron up there. And Lin has Aquarius on the MC.

Hot Damn! Scorpio guy sees the midheaven! I find it even funnier that the thing he notices, the most public point of the chart is integral to his game in which he describes the person for an audience of their peers. This is why everyone agrees with his little assessments and enjoys the game. He is picking up on the public image in a public setting.

This idea is still in it’s nascent stages. I’ll be back when I think of more examples. In the meantime, do you have a thing you pick up on other than the Ascendant? Or maybe the Ascendant is your thing?