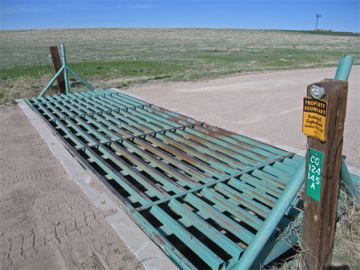 My neighbor’s property was fenced with your basic barbed wire. Next to the mailboxes there was a cattle guard running across the break in the fence where she turned off the dirt road onto her driveway.  Cattle guards spook me out. This is probably because I saw a calf stuck in one once. You know how they work don’t you?

A cattle guard is a metal grate installed over a deep trench. Not that deep. Three feet or so. Deep enough. Cow legs are skinny and if they try to cross the guard their leg(s) slip through and that’s that. They can’t get out; they’re caught in the act. Cars are fat, so have no problems. People can manage them too, so cattle guards are placed at any breaks in a fence, across driveways or gates to keep the cows contained and they are pretty much infallible.

Once installed, a cattle guard lasts a good many years. They are virtually indestructible. About the only thing that can happen is flooding causing erosion and over time the hole underneath can fill up with dirt which allows a cow to walk across on the piled up dirt and when this happens it’s a big production to replace them because they’re heavy.

Don’t ask me how heavy, just believe me. you can’t pick one up and toss it around. You need a truck, a rope, a man, a crane, a hoist or something like that if you want to mess with them.

I just want you to get the picture here. The mailboxes are alongside the creepy cattle guard that marks the break in the barbed wire fence. Every once in awhile I’d see the brown of a brown and white cow mulling and I don’t care one way or the other. I got to settling in.

I had a lot of company come by and I was happy about it because the company was invited. You may think this is a given but it’s not. Pretty soon all sorts of people started showing up at my house UN-invited and one of the people was a cow. Yep. I came home in my truck and found a cow in my yard.

Well excuse me, it must be a hologram, right? I laughed. I got out of my truck and you know what I said don’t you?

And then I laughed some more. I laughed while I could because truth was I had a problem in my yard and it weighed… well it weighed as much as two sides of beef didn’t it?

I had not been around enough cows in my life to find them normal. I’d seen them now and then as part of scenery but they were someone else’s affair, not mine and this was a good thing because I had idea NONE what to do with a cow. Matter of fact, back then I was vegetarian so I was especially out of my element. 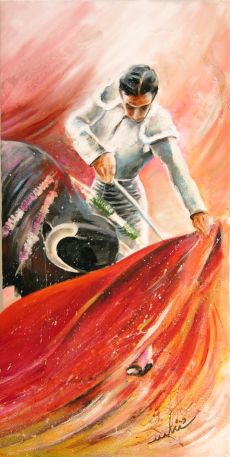 I scanned in my brain for ideas. I was 24 and not all that experienced. Do I call the dog pound?

Wait a minute. We don’t have a dog pound around here.

I decided to ask the cow. I talked to this cow but believe me, I stayed back from it. I thought it might step on me, or who knows what else.

“How now brown cow. I come in peace,” I said. I laughed because I’d seen a lot of things but never a cow in my yard. I thought of that song from, Sound Of Music, “How do you solve a problem like Maria” where this cow was Maria. I was in a pretty good mood considering this large brown Space Invader standing 3 feet from my front door. You don’t think he’ll charge do you? Boy, I hoped not. I didn’t have a sword.

Maybe you know that my mother also used to paint bullfighters. Besides ghost towns I mean. Bull fighting men were her number one subject and she painted them everywhere. She painted them life-sized on the walls and doors of our house so this is why I worried I may have to gore him or something.

Not that I knew if he was a boy or not, because I didn’t. Scared of that bullfighting thing, I quick looked down and make sure I was not wearing red. I did not differentiate between cows and bulls, do you? Wait a minute. People don’t gore bulls, do they? It’s the other way around. I didn’t want to be gored or to have to stick a sword in a bull. Yeah, that’s it. Now we’re getting somewhere.

“Who are you, cow? Where the hell did you come from?” I asked.

Then I thought about brands. They brand cows, right? I’d seen a couple western movies. Okay. I’d seen one western movie, a western movie. I grew up without a TV, did you know that? It’s true and this is one of the reasons everything is just so damned mysterious to me.

I’ll tell you one thing. I was going to think twice before I walked behind the cow. I don’t want to spook him and have a terrible accident occur somehow. I thought I might be in danger so I planned to make a wide circle around him and look at his hip for a brand but decided instead that I in way over my head and should really call for back up.

Motioning to the cow with my hands as if to say, “Down boy”. I cautiously walked around him telling him “Stay.” Hey. Dogs I know.

I got in the house and grab the kitchen phone with the long cord. I dial the Scorpio. This is a guy I am going to marry but I don’t know it yet.

“Well either do I. I betcha he came from that ranch across the street though. They have cows over there, don’t they?”

I didn’t answer because I didn’t think of that.

“I don’t know. Yes. Yes, cows live over there but I didn’t think of that. There is a damned cow in my yard, did you hear me? I don’t know where the hell he came from. He’s not mine. How can he be from that ranch? How did he get from there to here? Was he airlifted? He can’t get out of there.”

“I don’t know Elsa. He is not supposed to get out and go truckin’ like that but don’t you think that’s the most likely explanation?”

“No I don’t. He must of come from somewhere else.”

“Is the fence down over there? Maybe they staged a break out. Maybe he’s unhappy and out scouting around for a new home.”

He laughed. “It’s a him? You got a bull in your yard?” He laughed again and annoyed me.

“I don’t know. I don’t know anything about cows. Or bulls, if that’s what you’ve got over there. But I bet your neighbor does. You have a number for anyone over there?”

“Tell ‘em that you’ve got one of their cows or bulls or whatever it is. Tell ‘em to come get it. I bet they don’t know he’s gone. They’ll be glad to hear from you.”

“I don’t know. She doesn’t like to be bothered.”

“Well this time she does. If she’s got a missing cow I bet she wants it back. Call her up and if she can’t get rid of him for you, call me back and we’ll think of something else.”

“Do you think I should call the dog pound?” I asked. “Just kidding. We don’t have a dog pound out here.”

The Scorpio lived in the booming metropolis of a nearby town of 30,000.

“So you think that’s the best idea?”

“Yes. That cow belongs to someone and 95% chance it’s hers. It didn’t just drop from the sky.”

I actually thought it may have. I don’t really know that much about cows.