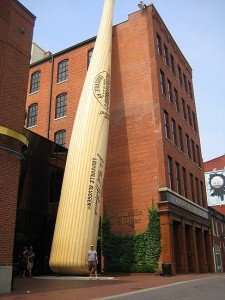 Self-defense and home-defense are frequent topics here on the blog and on the boards. Recently such a thread was revived, Defending Your Home and Family, and I was actually surprised at the poll results, with 88% in favor of defending oneself and home.

I’ve been in the position of having to make that call. In the middle of the night a man kicked in my door. I heard the preliminary kicking, dialed 911 and dropped the phone. I pulled my bat from under the bed and ran to meet him in the living room where I brought the bat down on his knife-wielding arm.

I defended myself with a baseball bat but the perpetrator was able to take it away from me and beat me with it. I kept my wits about me and drew him through the house, with me as the bait, to keep him away from my sleeping baby in the back room. I kept close to him, rather than run, so as not to receive a full swing of the bat. I kept us in corners and against walls, restricting his full force of movement. Eventually I worked us out the front doorway where I ran to the middle of the street and started screaming for help. I heard sirens and ran back in to protect my baby. He was awake and fine. I gave my report to the police and they drove me to the hospital.

My moon is in Capricorn and I feel responsible for my home and everyone in it. I have Scorpio Mars and I wouldn’t trade it for anything. I have Mars in the third house (Mercury-ruled) and I act fast. Saturn in the 8th aspects my mars by quincunx, like a see-saw. I weighed the consequences for attacking vs. defending for a moment too long and lost my opportunity. But now I know that about myself, and it will not happen again.

The attorney handling the city’s case was shocked that I was willing to participate fully. I was shocked that there was any question. The case was strong but it was settled rather than tried. That was a long time ago. I never got my bat back, but at that point it was broken anyway. Screw it, I still have golf clubs.

Where is your Mars? Do you know how you will act in a crisis, and can you see it in the astrology?