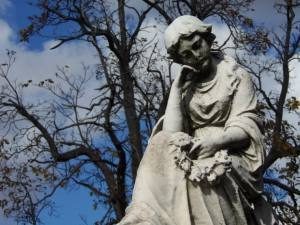 How accepting are you of death?  Someone asked me how I might handle the death of a specific person (a relation). I told them that I was ready for the death and thought I’d handle it well.

I am not sure if this was surprising to her. I do know I have been influenced by my husband who talks about death all the time. I was also affected by what happened to daughter which is something that changed me, fundamentally.

Having merged these two things over a number of years, I’ve become more sophisticated around loss. This is probably fitting for someone with an 8th house like mine, however I was not always this way.

I used to handle death very badly. I saw a lot of it when I was young and then I didn’t see any for a very long time.  I escaped having to deal with death long enough to begin to live in a dream world about it but all that came crashing down of course. Today, I have been stripped of all my naïveté. I know I don’t live in a protective bubble.

There are things that come of experience. In conversation, these things can be exposed. An event that may send one person plunging into the depths of despair would send me nowhere. This is important to realize in event of a crisis but it’s also interesting to consider in the grand design of things.

Someone has to have a cool head and maybe that’s me. But a group can turn on the person with the cool head who is not having the collective emotion. This is something I’ve experienced.

I don’t think the angry mob considers how the cool head came into being.
It doesn’t cross their mind that cooling down their own head might be a good idea.

This makes it dangerous for a person like me. It leaves me the option of isolating or perhaps I can develop further though I am not sure how to do that at the moment. I am going to look into this now because I can see the storm on the horizon and I’m gettin’ too old (and too smart) to be run over by one of these just to stay in denial.

~~~
I wrote this in 2011. Eleven years later – still real.
To update, the family member mentioned (which was my father) has passed.  If was a like ripple in a pond.
Also, there is a full moon in Cancer today, opposing Pluto in Capricorn. Death in the family…

Do you have experiences that grossly separate you from others?