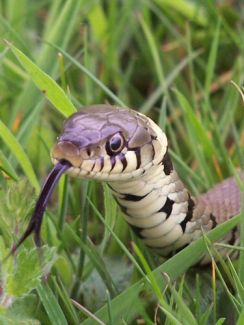 Loonsounds wrote on Astro-Humor: Dumping Your Lover Around The Zodiac:

“Dumped by Scorpio You come home and your keys don’t work. When you try to break in the police come and arrest you for violation of a restraining order you didn’t know existed….”

Now this actually happened to me. Yep. I had a Scorpio file a bogus restraining order on me and furthermore show up in court with this woman (a mother figure, he had a 4th house Sun) damned near holding his hand as if he were actually scared of me or something. I was flabbergasted, there is no other word for it and boy did that judge ream him out.

Yep, the judge saw right through him and humiliated him to the bone. As I have said many times I am really not someone you want to face in court but I have to say this was my worst throat-cutting by a lover, ever. And get this:

Two days prior I woke up in bed with this guy having had a nightmare. “I dreamed of a snake in the grass,” I said.

He stared at me, that regular Scorpio Sun stare with Pluto conjunct his Leo rising square the Sun.

“And you’re the snake!” I blurted out without a thought.

I can’t remember his response, I don’t think there was one but 2 days later there was a knock on the door. I opened it was served with a restraining order and forced to leave my (MY) apartment, taking only what I could grab in 5 minutes with 2 cops standing by.

What was your worst dumping ever?