In relation to the idea of astrologers being persecuted, this was about fifteen years ago. I called my sister for a chat:

“I was thinking I was going to get a bumper sticker,” I said.

“What? Why would you do that?” she asked. “Bumper stickers aren’t for people like you. Forget that. Just get out of the car and tell them who you are like you usually do.”

I snorted. I hate when people know me better than I know me. But anyway I will never forget my first astrology club meeting. I finally got to “town” from the desert and showed up at this meeting and I was just astonished. Because the President of the club got up there to speak and announced in a coy, giddy, girly voice that she had done the unthinkable. She’d actually dropped a hint to someone at work that she had some passing interest in astrology. And I just couldn’t believe it. Huh? You’re the president of the astrology club! 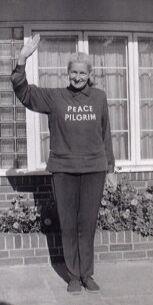 And my attitude stems from Henry. Henry used to go to Flying Saucer conventions. He would travel out of state each year to attend… and his trucks (both of them) were covered in bumper stickers to attest to this:

So I grew up like this. You tell everyone you are a vegetarian even if it is unheard of in the era. You broadcast your beliefs, up to and including standing on your head in grocery stores in your geriatric years, to demonstrate the benefits of a meatless diet. You stand on the side of the road so you can meet Peace Pilgrim, by God! You show up!

So this is what I learned. But these days… well I have been in “town” awhile now and I understand that President gal now. I still can’t be her. I still have to hang my ass out here on a daily basis, but I understand her now and that’s something.

And I understand the soldier’s tattoos. He ascended to the absolute heights of his vocation. He’s been the best soldier in the world and he’s supposed to hide this? That’s ridiculous. How many can say they were the best in the world at anything? Should he not be proud? That is also ridiculous. It’s your problem if you don’t understand. 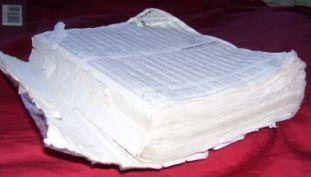 It’s obvious it takes all kinds but I am always going to be drawn to those with more courage than sense. Life is short. I am going to live mine and just hope I don’t go to jail.

But if I do, I will still be an astrologer, won’t I? And I’ll be reading charts for my jailed peers by memory of the ephemeris.

Pictured – yep, that’s my ephemeris, I use it every day. It just lost its 3rd homemade cover. Drat!