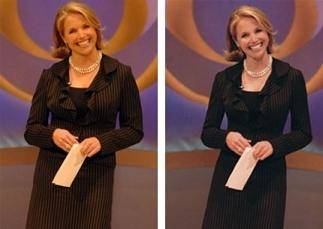 I was talking to an astrologer pal today about Saturn opposing Neptune in the sky and how her life has been impacted as well as events in the collective. Well, mostly she was talking. It was her dime. But to sum it all up, in the end she said she just felt everyone was crazy. “Crazy has never been more popular,” she said. “Do you agree?” This is cf talking and that’s how she talks. Elegantly, that is.

Well I told her I was not sure if I agreed or not. I explained I have strong a strong Saturn Neptune signature in my chart and have been very curious to see how the collective would deal with what I and people like me deal with day in and day out. A disappearing (Neptune) reality (Saturn), that is. Reality isn’t real and un-reality often is.

She asked me to elaborate and I brought up the photoshopped Katie Couric shots as an example. “There’s a picture of a person and you think that’s what they look like, but it isn’t. It’s a hologram. Like that photographer in Israel who was faking the war photos. You are being shown something, but it is reality? Obviously not. And is he the only photographer fudging photos? Doubt it.

I explained the day before I heard about 10 seconds of a Bush interview around Katrina.

“He’s got the microphone in his face and he opens his mouth and all this unreal stuff comes out. The people think the government’s response was fantastic or some such thing. And you stand there hearing this and wonder if it’s real. Is it? Is it real because he says it’s real? Is that how the people feel?” 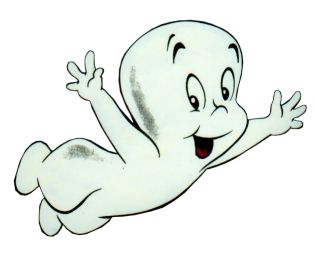 And you get the idea. Real unreality is everywhere you turn. You think something is real (Saturn) but hey! Maybe not!

And later in the conversation, I was trying to explain around the circumstances in her life, that she was not going to be able NAIL things down. It’s just not possible. Nail someone to a cross and whoops! Their spirit slipped out, right? Hah! Tricks on you. It’s very slippery stuff. Like catching Casper! Good luck.

And this is very hard for the pragmatic or for those who like control (Saturn). Because you simply can’t execute in normal fashion. And the harder you dig your heels in (Saturn) the more you’ll be undermined (Neptune).

So what about you? Have you noticed your reality (Saturn) shifting (Neptune)?

~~
Keep reading about the Saturn Neptune opposition…Conversations With Pisces