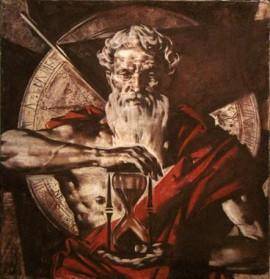 In theory most people want to see people get their comeuppance but they also want control over it. I suppose this is primarily a Saturn function though I could argue some other angles.

The fact is people think they can break the rules be them social or societal and boy are they surprised when someone breaks the rules on them. They think THEY are the force of nature, see. They are the special one who can do whatever they want while the people around them be decent and I have a story to illustrate.

One time the soldier pulled into a video store parking lot, went inside to rent a movie. He came out to find some kid had gone through the parking lot with his knife and slashed tires on four vehicles, including his own truck. He caught him in the act.

Spotting the soldier coming for him the kid took off. He was teenager, about 17 years old, fast and wiry. The soldier, in his late 30’s, maybe even 40, took off after him.

The kid was fast and the soldier was getting madder and madder having to chase his young ass, you can imagine. My husband is a lazy man and if you make him have to run after you like this… get his heart pounding and shit, well he is going to make you very sorry when he catches you. He did catch the kid.

He told the kid he should be ashamed that an old man like him could catch him, “What’s the matter with you, some old man like me can catch you?”  At this point the kid tried to stick him with his knife. Yep, he tried to stab him and not appreciating that, the soldier wrapped his arm around his back, disarming him and then he slammed his whole body, including his head into a brick wall. “Now we’re going back to the store,” he told him.

He commenced to holding him up by his shirt neck and half dragging him down the road with his arm wrenched behind his back. No doubt he was talking to him the whole time, something along the lines of how he was going to back to the store and and apologize to everyone and if not, how he’d be happy to take it out on the kid in the form of an ass-kicking.

The soldier explained it was nice people who got their tires slashed, a mother with a baby, never mind his own truck so you can imagine how pissed he was. He said he has to drag the kid by the scruff of his neck a long way (almost a mile) but it was the kids own fault because he was the one who ran. Eventually they made it back to the store and then the police showed up.

Seeing the police car, the soldier drug the kid over to it, picked him up and threw him on the hood of the car, and announced,”This is the motherfucker right here.”

He said everyone was pretty stunned – the kid was looking a little rough by now and to his great surprise no one wanted to press charges. That’s right. They thought the kid has gotten his comeuppance already but the soldier did not agree – he pressed charges.

He owned a machine shop at the time and the kid and his mother came to his work and asked him to drop the charges. They said they would buy him a tire and he said, “You’ll buy me a tire and you’ll put it on.”

He said they came out to do this and he made the kid stand there and listen to him rant for a half hour. Like this:

“Why don’t you try working, you little bastard? Work for a living why don’t you. Ever work a motherfucking day in your life? See that,” he said, pointing the machines. “That is work. I had to work for the money to pay for that tire and then some little asshole like you comes along and you’re going to stick you knife in it? I’m telling you, if I ever catch you doing anything like this again, I will beat the living shit out of you, I will beat you to a pulp if I see you slash another tire, you better not let me catch you or my boot’ll go so far up your…”

He said the kid stood there the whole time, “Yes, sir. Yes, sir…”

Eventually he allowed the kid to replace the tire and he did drop the charges but my point is this:

There are people out there like my husband (and like me for that matter) and when you try your little games with us, you get a whole lot more than you bargained for.

For the record, if I was this boy’s mother, I’d have thanked the soldier for what he did. This because I’d have obviously taught my kid right from wrong and if he didn’t learn from me, my hope would be that he learned from someone and as far as I am concerned the soldier’s method is as good as any.

What I don’t understand is leniency in a circumstance like this. Everyone knows you’re not supposed to run around and pop people’s tires when they’ve done nothing at all to you and if you have forgotten this, then this story is a reminder.

It’s like a rapist going down the block from house to house. You get to mine, I am going to kill you.

Or like the boss who methodically sexually harassed every young woman who ever worked for him right up until he fucked with me. I was 17 years old and I took him out.

Comeuppance at times is violent. Violent and effective and as far as I am concerned – just.

Have you ever been taught a lesson but good?