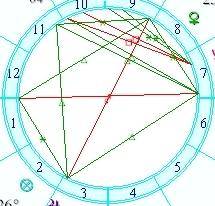 My current man and I are very queer and we have a composite chart that will not quit! And this is a gift and a curse. Because at various times we have very much wanted to quit! And guess what? Too bad! ::laughs:: Too bad, so sad, SUCKERS!!!

Now don’t mistake me. I love the AMF to the point of sheer stupidity. You could not find a woman more enamored with a man. But he is difficult and I am difficult. And 95% of the time we are thrilled with this. But when the other 5% shows itself, well…

So here’s the point: I am a dreamy, ultra loyal, true blue commitment-phobe! He’s too much Scorpio square too much Aquarius, so he’s never sure if he should devour me or move to another country just to get some space!

And it works very well most the time. Because I’ve got my 8th house to answer his Scorpio. And I have a very strong Jupiter. He wants space? Fine! I’ll go run with Kathy! I’m going to the gym! And believe me the last thing I want is some guy ringing my cell phone wanting to know what I’m doing every three minutes.

Further, it doesn’t bother him if I talk to my old loves! He is unfazed.

It doesn’t bother me when naked women, gorgeous models no less, come over to his place and strip down so he can paint them. He photographs them in his bed and I am unfazed. So you can see, we’re looking pretty good until all the sudden we’re not. And at that point, all kinds of twisted hell breaks loose and we both want out.

But we never get out. It seems we habe an un-killable thing. And I remember some time ago, on one of the worst days, I was looking at the composite chart and it hit me. “There is no way out of this thing,” I told a friend. Kathy, this was, because she studies astrology. “I mean look at that thing. Do you see a door? There’s no fuckin’ door there! What that is right there, is a closed circuit,” I said. And I’ll tell you what it feels like.

We get anywhere near each other and before you can blink a vacuum forms around us. I swear, the day I met him, I saw his brake lights come on when he tapped them while sitting in his car. I hadn’t even seen him and I knew I was in trouble! I knew this was the man like an animal can sense an earthquake. So here’s the thing… 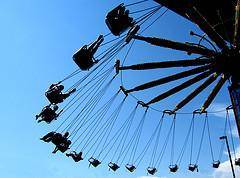 In this case, “the relationship”, the composite chart that is, dominates. We have never been two people exchanging energy like some kind of ping-ponging back and forth. It has always been a blended thing. It has been a synergy from the first minute. Two people with no separation. And frankly, I think after a time, it exhausts us.

It acts as a vortex, see. It’s fun. It’s all kind of things that are very, very good. But it’s like being on a carnival ride, going round and round and round. After awhile it’s as if the velocity builds and it seems every 4-6 weeks or so, we’re tossed off the thing, flying through the air to land SPLAT, in our neutral corners.

Get it? It’s as if we have to escape the composite! The relationship that is. Because once on that ride…once in the composite, well it doesn’t take long before everything else gets shut out. Like scenery passing in the blur and the ride goes faster and faster until everything but the vacuum we are in become irrelevant!

And he has better awareness of this than I do. He says he needs space. He needs to get away from the “noise” so he can hear his own thoughts. That it takes time for his feelings and thoughts to come up and they haven’t a chance in hell when he’s in the vortex!

Over time, I have become aware of how important these periods of separation are for me as well. I like knowing I have a choice! I like knowing I don’t have to do x, y and z, day in and day out. Basically we get tired of thinking of each other every minute of every day so we separate, but it’s been very clumsy at times. To say the least! What do you think it would feel like to be flung from a ride at Disneyland to land on your fuckin’ head? Well, that’s what it feels like.

So I land and he lands and we’re both stunned for a time. Eventually, bruised and dirty, we get up and dust ourselves off. We set about establishing ourselves as individuals with a mixture of dread and relief.

Dread, because we offer each other 95% bliss and now we’re supposed to live without that. Relief, because come on. It ain’t cool to land on your head every six weeks!

So we are separate, but not really. It’s a head fake every single time. Who in their right mind is going to leave someone who gives them virtually everything they have ever wanted and heaps more on top of that? Who is going to walk away from the one who heals them from the inside out? The one who makes every single thing in the world seem okay, with just a kiss? That’s not going to happen.

But this is my point: When in close proximity “we”, the two individuals, become the composite which is so incredibly strong, we lose ourselves somehow. And we literally have to get away from each other in order to have a non-joint thought. In order to reestablish ourselves as individuals! But leave the relationship?