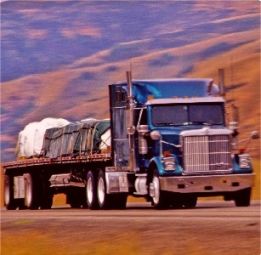 Retrograde Mars in Cancer is setting off the soldier’s Mars, Mercury. Saturn T-square (as well as our synastric grand cross) and this really isn’t funny because it’s phenomenally dangerous except for the fact that it is…

Yesterday he was rolling down the road, in a flat bed this and one of the straps that was holding the load snapped (having been sliced by jiggling sharp-edged metal).

Now if the load comes off the truck, people will be killed without a doubt so this is serious (Saturn) except for the soldier is a safety freak. Being ultra aware that people can die and wanting nothing to do with someone being killed due his laziness he pretty much straps whatever he is hauling to his truck until it yells for mercy so the load was not in danger of leaving the truck however..

However, the strap snapped and was flapping around… on the hood of a car alongside him on the freeway.

“Yeah, it’s just flapping in the breeze,” he said. “And the car didn’t move at all and I was thinking what kind of dumbass is this? Why doesn’t he get out of the way?”

“But then he turned his lights on – it is was a plainclothes state trooper and he wound up following me all the way to a truck stop where he made me un-strap and re-strap and the whole load.”

“Yeah, not to mention the guys on the cd, talkin’ shit the whole way.”

“Oh, I see you got a buddy, there… stuff like that. I had to drive for miles with this cop on my tail.”

How many ways can you see Mars / Mercury / Saturn in this?

And they say astrology is bunk! Yeah, right.