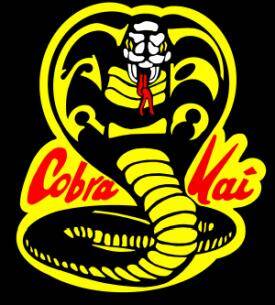 Earlier this month, Netflix released the third season of Cobra Kai, the sequel to The Karate Kid. I’ve been watching the show since it came out in 2018, and all I can think of the whole time is that it is a perfect example of the Aries/Libra axis. Everything is about mirroring, balance, and what it means to truly be victorious.

In the original Karate Kid movie, we follow a young boy, Daniel LaRusso, as he struggles to compete in a karate tournament. He meets a wonderful mentor who teaches him that karate is all about balance and inner harmony. He trains so well that he is eventually able to defeat his rival, Johnny Lawrence, who is the star pupil at the no-holds-barred Cobra Kai dojo.

The show picks up around 30 years later. Daniel has grown into the owner of a successful car dealership and has the perfect white picket fence type of life. Johnny, on the other hand, is an alcoholic working part time as a handyman and living in a run-down apartment.

Things start to heat up when Johnny’s estranged son starts training in karate with Daniel, while at the same time, Johnny starts training Daniel’s daughter’s boyfriend. Their old rivalry is rekindled, and the show follows their attempts to one-up each other in their preferred style.

Johnny teaches in the classic Cobra Kai style. It’s full Aries. The focus is on aggression, attacking first, and winning at all costs. He tolerates no weakness and eventually builds a dojo full of kids who were bullied in school and wanted to reclaim their power. He elevated them so that they could defend themselves.

Daniel, on the other hand, teaches a Libra style. The focus is on inner peace, balance, cooperation, and only fighting in self-defense. Winning is far less important than tranquility of spirit. Many students are initially put off by this, but the ones who stick around begin to blossom as martial artists.

The drama really gets going when Johnny and Daniel each decide to enter their dojo in the same tournament that they fought in all those years ago. The Cobra Kai kids focus on aggression, using all kinds of dirty tactics to win, including dislocating the shoulder of Johnny’s estranged son by kicking him when his back was turned.

This causes Johnny to reconsider his tactics, and he tries to focus his students toward fighting fair. And at the same time, Daniel, who is furious that his student was injured in an illegal attack, begins to scheme to win by whatever means necessary.

There’s so much more to the story, but you can see the idea, right? Everything is mirrored. One side is pure Aries while the other is pure Libra. One focuses on winning and the other on balance. One teacher is a rough-around-the-edges scrapper while the other is popular and well-liked in his community.  However, once the Aries energy goes too far, Johnny switches and begins to promote a more Libran philosophy. And when Daniel is backed into a corner, he discards his Libra values and embraces Aries aggression.

The show continues this way, with each side constantly becoming the mirror image of the other. As one moves forward, the other moves back. When one attacks, the other retreats. They are perfect opposites moving in tandem.

I think this says a lot about Aries and Libra in general. These two signs couldn’t be more different. Aries wants glory and Libra wants friends. Aries will stop at nothing to win and Libra abhors the idea of being the bad guy. But when push comes to shove, these signs need each other.  Aries eventually learns that victory is hollow when there’s no one to share it with. And sometimes victory can only come with a little help from friends. And Libra learns that sometimes you have to come out swinging. Sometimes diplomacy isn’t enough, and you have to be willing to not be liked in order to succeed.

These two signs are as opposite as two signs can get, yet they are forever intertwined. Aries needs Libra and Libra needs Aries. And nothing illustrates that concept better than Cobra Kai. If you liked the original Karate Kid, or if you just want to get a good feel for the Aries/Libra relationship, I highly recommend checking it out!

Have you seen Cobra Kai? What did you think of it? If not, do you have any Aries/Libra stories?