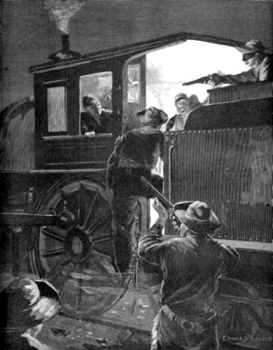 Truck driving is dangerous. The last company the soldier worked with statistically saw 1/3 of their trucks wrecked each year. Not a day goes by where the soldier doesn’t see dead drivers on the road and when I used to drive to meet him all the time I saw them myself.

There were all those drivers killed on the Oklahoma ice storm we got caught in and on another trip I passed 17 trucks blown over and off the road caught in gusts of wind with their trailers empty. But there is a new and growing threat. People have started stealing trucks with knives or at gunpoint and taking off with the load.

With payoffs like this and nothing like the security a thief would have to penetrate to rob a bank, trucks are increasingly becoming targets and it is not some random thing. The Cuban gangs are primarily involved in this and they know exactly which truck they are after. Perhaps they have a man working on the forklift that loads the truck with a high dollar load The truck takes off the operator calls it in and the first time that truck is left unattended, even for 5 minutes, that truck is gone.

It is very hard to catch these thieves and when they do catch them the penalties are laughable. Consequently truck driving becomes more dangerous every day, especially around Dallas or Atlanta from what I’ve heard. It’s amazing how you never hear of this. 15-30 billion dollars worth of cargo are stolen in the US each year.

As for the soldier, with his Mars, Mercury, Saturn T-square it would be no surprise if he found himself in a violent confrontation over trailer full of cell phones. He is also no stranger to mangled metal and I just think it’s notable. He is just meant to be in danger all the time, I guess and I am meant to deal with it.. or at least I will this time.

As for the robberies, they are sure to become more and more common as more and more people lose jobs and buy off the black market because that is what they can afford.

For those on the front line or with access to it, it really looks as if it is turning into the Wild West out there and it is hard for me to care or concern myself when Bernard Madoff sits in his penthouse sipping a martini. Who do you trust anymore? Anyone?