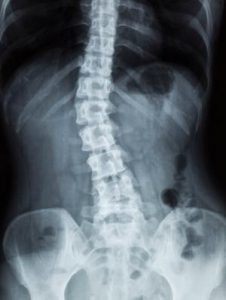 This is *not* my personal back,

I’m a Capricorn rising with Lupus and arthritis of every stripe. My neck is so jacked, I have three vertebrae fusing together on their own.  There is nothing to do about it really.  They killed the nerve almost two years ago. They tell me I’m lucky and I believe them. I’ve not had significant pain since.

I got my first steroid shot in my knee at the time of my Saturn return (28 years old). Incredibly, my knees have not bothered me since unless it’s a super cold rainy day. Snow is fine.

I started getting steroid shots in my back in my 30’s. I had torn discs, from running down stairs, carrying two kids. The building was on fire! My son was eight weeks old and I wasn’t quite healed. I also didn’t have on running shoes. I was in no shape to run down the stairs with a baby in a car seat and a 4 year old on my hip.

I got tired of getting those shots so I opted to quit doing things that aggravated my back (like bend and twist – yoga / Pilates).  My doctor told me I was getting older anyway and  from what he would see on the series of MRI, I had a rheumatoid problem that was advancing rapidly, which would eclipse “torn discs” in the future…

I started to become “crippled” three years ago. I’ve had shots in both hips, since. I just keep going. I have never taken a narcotic drug for anyone of this.

I finally found a spine doc I like (since moving from Colorado). I decided I could not longer stand the symptoms and went to him, pretty sure there was going to be a surgical deal at this point. And I would jump on that as an option. That doesn’t mean that you should.  But my treatments tend to be successful so if I had a chance to roll back ten years, I would.

The doctor was licking his lips. They really thought I would be a “live one” as far as surgery goes. He’s seen my neck, which is EPIC.  He ordered and MRI and dynamic x-rays and guess what he found? Scoliois.

What the hell. It’s UN-treatable, basically. The curve is pretty bad. There is one disc that looks disgusting. They are going to shoot steroid into it tomorrow. Beyond that, it’s physical therapy and  after that, I will have to go to a “scoliosis specialist” in the city. Oh brother.

I was really surprised by this.  I have had several mri’s of my back and at least on x-ray. How come no one told me this?

But someone DID tell me this; guess when? I was about ten years old.  The school nurse checked my spine and told me I had scoliosis.  Saturn is slow, you think?

Are you a Capricorn rising. What’s up with your bones?