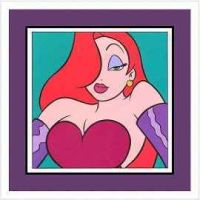 It could be argued I have more nerve then sense.  Most of what I want to talk about is risky if not completely taboo. I don’t know what to do about this because like, Jessica Rabbit, I am drawn this way.

Most who read here know I’m interested in what is deeply rooted or in the blood. When you’re talking about blood, you’re talking about race – a HOT topic. We’re supposed to pretend there is no variance between the races even though evidence to the contrary is in my face every day.

I’m constantly baffled by other people’s thoughts and deeds. I chalk this up to my childhood (my roots) which was unusual. But now I wonder if it’s just that I’m Italian and the people who baffle me, aren’t. I wonder if my drives and various feelings about things might be rooted in thousands of years of history. If this is real, it is a big thing to know as it would explain so much.

Various cultures have rules but I grew up in the melting pot that America where all the cultures came together. I’m American on one level but on a deeper level, I’m Italian.  It could be said, my head is American but my blood is Italian. My instinct is Italian. I’m beginning to understand it is not reasonable for me to expect that people accept the things I accept to part of life (like violence) just because I do.

As an example, if someone rapes someone, it is perfectly okay with me if men band together, go capture the offender, bring him in, try him and kill him. This seems normal to me. My head can argue but deep down, this is acceptable to me and easy to understand.

Is this because I was born in Arizona aka the “old west”?
Or is it because I am Italian in which case the history goes back thousands of years?

Italians are also super ambitious and competitive.  We’re empire builders, as my husband would say.  We want to do things on a grand scale and just don’t believe in half-assed anything.

Recently I was reading about, Versace and there was not one thing in the story of that family I could not relate to.  Last week I watched, Da Vinci and the Code He Lived By (History Channel).  Da Vinci, was a born a bastard and he was driven. 60% of capacity is not enough. It’s 100% all the time and I feel exactly the same.

I’ve been criticized for it, called a work-a-holic but this is my nature. It’s my nature, not a disorder.

When Michelangelo came along, a rivalry sprang up between he and Davinci and my thought on that is, of course!

I’m constantly confused as to why people don’t seize opportunities that seem to be laid out in front of them to my eye. Why don’t they capitalize, I wonder? I’m now playing with the theory that the difference between me and them is in the blood.

I’m not suggesting my blood is better than another person’s, only that is is different. I place a very high value on individuality and think it imperative people express themselves as individuals. One person paints, one person writes, one person bakes the bread, one person designs clothing, one person is an accountant, one person fights the wars and so forth.  A strong, vibrant society results from this diversity. The idea that some are excused from performance and others subsidize them is repugnant to me.  Everyone is here for a reason and self esteem is gained when people pitch in with whatever they have to offer.

To add the astrology, everyone has a Moon in their chart. Everyone has roots.  My roots are Italian – Cowboy – American.  I can’t escape this. I also can’t expect people to feel as I do, to be deeply driven and so forth. I am catching on.

What is in your blood? Where is your Moon?