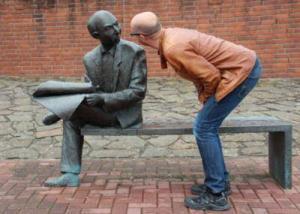 The other day I was talking to a friend about something that’s changed in my spiritual practice. It was a minor thing, but the conversation got off the rails pretty quickly. Something like:

“Yeah, I’ve found that, for now, my ancestral practice is most meaningful when I work through my own end of the generational trauma rather than attempting to engage directly.”

“You mean if all of that is even real.”

“Okay, fair enough. But even from a purely non-spiritual standpoint, working through the same kind of pain that my ancestors did feels really powerful.”

“Yeah, but a totally non-spiritual view doesn’t seem like the whole story either.”

“Right. But for the sake of the conversation, I need us to at least temporarily agree on a worldview. Otherwise I can’t get to the information I’m trying to convey!”

We laughed it off, and later engaged in the lively debate they were looking for. But it did occur to me that this happens every time. I chalk this up to their Jupiter in detriment in Virgo.

Jupiter rules our worldview. It’s the overarching philosophy we operate under. It’s the goggles we wear as we go through life. It requires commitment to faith. And Virgo clearly isn’t the best match for that energy. Virgo needs to be correct and have all its information lined up in neat little categories. It needs the details to make sense. And Jupiter isn’t especially concerned with details.

And so a discussion of something I experienced in meditation turns into a conversation about what meditation even IS. Everything must be endlessly dissected, and in the end, there’s never a resolution.

I don’t think this is a bad quality, by the way! There’s a reason I keep coming back for more. Their questions are smart and incisive and they force me to really think through my beliefs. If only we all had a friend like this to pop our bubble from time to time! The world could have been saved from a lot of zealots!

But I do think that it has got to be exhausting to wade through that mire of questions before getting to any of the Jupiter goodness. Then again, for my friend, I think the questions are the worldview. I think the relentless interrogation is the way they engage in belief. In a way, questioning belief systems IS their belief system. And that if that isn’t using Jupiter in detriment to your advantage, I don’t know what is.

How often do you question your own beliefs? Where is your Jupiter?