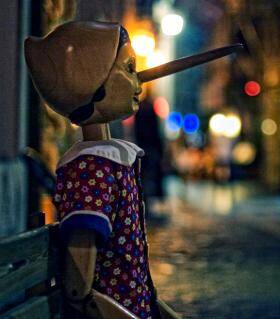 It’s officially Gemini season, and like the rising of the sun, social media is flooded with recycled quips about Gemini being liars. Gemini lies for fun. Or it’s just the two sides of their face talking at the same time. Or maybe they lie because they don’t want you to know they’re actually several owls in a raincoat pretending to be human. Ugh. It’s ridiculous. But where does this reputation come from? Well, it comes straight from the top, originating from Gemini’s ruling planet, Mercury.

Mercury is a trickster god. He’s concerned with ends, not means. He’s not interested in moral theory so much as real-world results. In the Orphic Hymn to Mercury, it even explicitly states that he rejoices in “fraud divine.” But why would the planet of thought and communication also be interested in lying?

Lying is a universal human behavior. The ability to lie is even seen as a developmental milestone in children. But more than that, lying is a strategy. It allows us to move through the world with grace, it helps avoid conflict, and it can even save our lives.

To be clear, I am not advocating lying! I am Jupiterian through and through, and I believe in being up front whenever possible! But I also believe that it’s important to look at the bigger picture to understand why we lie.

Mercury is traditionally associated not only with communication and lies, but with marginalized groups. The people who don’t fit in the box, who don’t quite make sense in our world, and who are pushed aside are all his children. Mercury himself doesn’t fit into category, being neither diurnal nor nocturnal, strictly male nor female, or malefic nor benefic. And Mercury knows that when the world won’t accept you, sometimes you have to lie to survive.

When Johnny Cash was arrested near the border after buying amphetamines, the press went wild. You’d think they’d have been focused on the spectacle of America’s favorite bad boy finally getting caught, but you’d be wrong. Instead, they were in a frenzy over a photo of his wife, Vivian, in which she appeared to be a black woman. This was the South in 1965, and racial mixing was still desperately taboo.

So Cash and his spokespeople kicked into high gear. They showed the media Vivian’s designation as a white woman on their marriage certificate. They solicited testimonials from her family and friends swearing she wasn’t black. They filed a multimillion-dollar lawsuit. They even issued a statement directly to the KKK. Not condemning the KKK, mind. Just asking them to leave her alone because she wasn’t the right target.

And for a while, the storm calmed. Life went back to something resembling normal, and the Cash couple’s attention turned to more practical matters, including their crumbling marriage. They eventually split and married other people, moving on with their lives.

You’d be forgiven for thinking the story ended here. It almost did. But recently, Roseanne Cash, daughter of Johnny and Vivian, took a DNA test. And it turns out that Vivian’s great-great grandmother was, in fact, a black woman who had been enslaved.

What’s fascinating is that it is very likely that Vivian herself didn’t know. In the South, it was not at all uncommon for families to hide or lie about the race of some of their ancestors. It has happened in my own family history. And it wasn’t out of shame or prejudice. It was out of the purely practical need to navigate the world as a person whose innate characteristics put them in grave danger. It was an attempt to insulate the family from the harsh cruelties of an unjust world. And, over time, the real history was lost. It’s a shame, but the real shame is the circumstance that required the lie in the first place.

In the same Orphic Hymn, Mercury is called the ruler of mankind and is described as being kind to mortals, particularly in matters of necessity. And I think we can all agree that survival is the ultimate necessity. It only makes sense that Mercury would choose to prioritize human life over moral purity. Theory is great, but life is messy. Sometimes we’re put in impossible positions, and in those moments, our only responsibility is to survive. Mercury knows that. That’s why he gives us the tools to lie.

Again, in the vast, vast, VAST majority of circumstances, truth is the best option. It builds trust, helps us understand the world, and allows us to connect more deeply to the people we love. But sometimes trust, understanding, and connection aren’t available to us. Sometimes all the truth in the world can’t save us from someone who wishes us harm. And in those moments, it’s Mercury who has our back.

What do you think about the relationship between lies and survival? Do you think there’s ever a reason to lie? How do you decide?