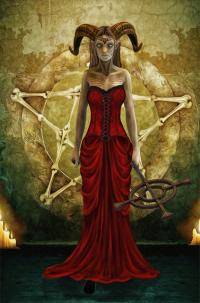 This is a post that I expect to get a little bit of flak for but I’ve decided to channel Lilith and do it anyway. One thing I’ve noticed in my study of Lilith is a that there’s a strong tendency to try to look for the positive in her. People come up with all kinds of interpretations. Lilith is the womb, they’ll say. Lilith is creation. Lilith is a Divine seed. I’ve even seen books proclaiming that Lilith is about community sharing and togetherness, which given that she ran away and told the Creator to where to shove it, I think that’s a bit of a stretch.

There’s a strong desire to make Lilith something beautiful, something soft, something more palatable. We make her a little bit spooky but in a mystical, magical, Instagram aesthetic sort of way. I think that really does us and her a real disservice. Because Lilith is meant to make us uncomfortable. That is her job. And when we deny our discomfort, we deny her purpose.

It’s understandable that we try to make her a little softer and more palatable. She fits into our lives better that way. But look at the irony here.  Lilith’s myth is that Adam and the Creator attempted to make her palatable so that she could fit into their mold. And when we try to make her beautiful we do the same thing. And she rejects that in the strongest possible terms.

Lilith is dark. If there any definition that I could give for her, any way to boil her down into most basic essence, I would say that she is the dark feminine. She’s harsh. She’s frightening. She is not nurturing. She is not motherly. She is not soft.  In astronomy, what we call Lilith is a void, a wobble, an imperfection. She is the fly in the ointment, the squeaky wheel.  She’s not anything that any of us want to embrace, and that is entirely the point.

I don’t mean to say that nothing good can be done with her energy. In fact very much the opposite. I think that there is a great deal of good to be done by working with Lilith, but only when we recognize her for what she is. Lilith is wound, a weapon, a furious war-cry, a primal, feral howl carried on the wind.  She is beautiful for the rot she reveals. She shows us what is broken, unjust, and wrong. And it is only when we embrace this discomfort and stop trying to dress her up that we can actually work with her properly. Accept the shadow. Step into the dark.

Do you embrace darkness? How?