Regarding that picture when I was 9, my sister wrote:

“That dress you are wearing came in this package someone gave us for rodeo week. We had to dress rodeo for school so someone gave us three dresses, that was one. The other two were gingham and ugly. (I decided.)

I had a thing for velvet and that dress had some velvet so I was considering it very carefully, so were you.

I decided I couldn’t wear western. I decided I hated western wear on that day and you ended up putting on the dress. Everyone thought you looked cute so Henry took your picture in it, remember?”

“That was Halloween! You are dressed as a ghost! You have a long white sheath thing to the ground with a black veil. (snip)

I thought this stuff came from goodwill but now remember the box and the gingham. I know I loved that dress – I thought I was a total rock star. It had sequins you know.” 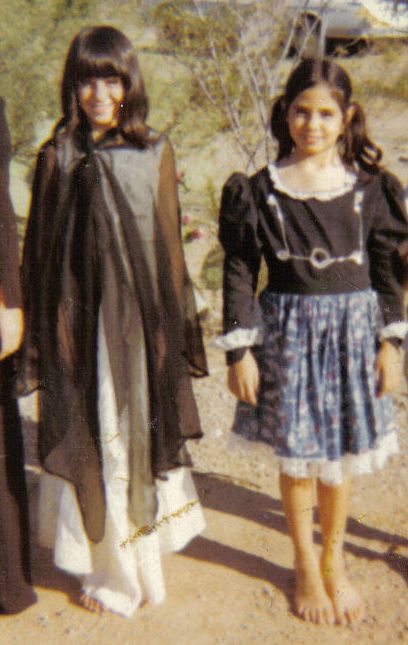 I think she looks like a dancer, already. And someone with a body that can wear clothes.

I think I look like someone ought to find me a karate class. I would definitely like to kick some ass.

We are barefoot because we don’t have shoes. Not that is it concerning, at least it was not concerning to me.

I note that we both have good posture, courtesy our Capricorn. We already had astrology books by now. Minds expanding, we were on our way!

For the record, this is what we looked like when we were, Low People in High Places