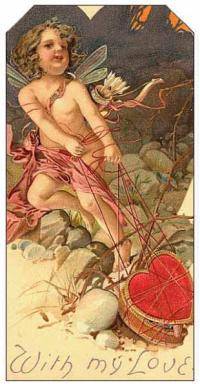 Let me be clear, I am talking about someone in real life here. This is not an online situation.

There’s a gal I know, she’s caused me a lot of pain. I was really happy in a group I belong too… right up until she and I crossed paths.

I don’t know exactly what the problem was. I guess it was the saint / sinner thing. My Venus square Neptune on the midheaven. At first she was all ga-ga over me. This always makes me nervous because I know the person is interacting with the “me” of their imagination.

This bliss period, which was great for her, scary for me, lasted about three months. At that point she became angry and frustrated with me for not being who she imagined. She tried to ruin me.

She did cause me a lot of pain. A year’s worth of pain. I never returned the favor. I kept my mouth shut and let her tell stories about me.

I didn’t do his to be a martyr. I’m just busy. It’s that and also that I have a lot of experience with this. Click the tags! But this gal really did try to ruin me and she caused me tremendous pain and she’s kept it up for a year.

I suffered over the course of the year but I’ve learned a lot. This was the gal that pushed me to the margins of life. This was not the hill I was going to die on, as they say. I had the hill, she wanted the hill so I gave it to her. I was resigned at first, but eventually I slowly found some peace with the situation which allowed me to begin to grow again. In short, she dealt me a death blow, but I failed to die.

Now in the meantime there has been a third party probing me for information, consistently, over all these months. I have deferred. I’ve been honest with this other person because I like them very much. “Yes, there is a problem there but it is not primary to what I’m dealing with at this time. It pales in comparison to what I am actually facing at this time… Evasive, yes. But factual. And I have a real reason for having to conceal things at this time. You’re just have to take me word for that… this is what I told her and what I am telling you, the reader. But last week, I decided to talk.

I’m not sure why I decided to talk last week, other than things have been evolving. And I do like this gal and I decided to satisfy her curiosity. So i was explaining the situation. The woman was challenging me so I was elaborating. The next thing I knew, she said, “Her husband is right there…”

I turned around and he was standing eighteen inches from me. “I don’t care,” I said. I meant it. What I was saying was true and it was not a secret. Maybe he was supposed to hear, yes?  She’s had an entire year to stop or better yet, stop and apologize.

So that was that. And then today, here comes this woman, who has avoided me for a year, while working to destroy my reputation. “Is that a new skirt?” she asked. “It’s pretty.” I laughed out loud.

You really don’t want to do this kind of thing with Mars squaring Mercury, but it happened. I don’t know exactly what her goal was but she got cold-cocked, I’ll tell you.

“…You’re a vicious gossip, you’re mean; you’re cruel, in fact. And I’ve been alive long enough to know if you do it to others, you’ll do it to me and so you have.”

The conversation lasted more than five minutes. She kept explaining why she was wonderful, I kept shaking my head and laughing.  Tears came (hers) and I held my ground. Because you know what? This woman has done what she did to me to others for YEARS.

I think Saturn is in Capricorn, people. You’re not going to lie your way out.