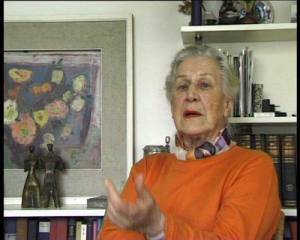 Last night, my husband I watched, Blind Spot – Hitler’s Secretary. It is an interview with Traudl Junge who was chosen to be one of Hitler’s secretaries when she was 22 years old.

She speaks eloquently on film, 60 years after the fact.  She explained how she thought she was in the center of information (Hitler’s bunker) at the time but she was really in the blind spot and I thought me must certainly be a Pisces (and she is).

She talked about how at the center of an explosion, it is calm and she describes, Hitler as fatherly, and polite in his private life, nothing at all like his public persona. The soldier and I were riveted.

We were both mesmerized watching her watch herself talk on camera because this is how she is presented. They filmed the interview and then filmed her watching the interview so it was sort of this Neptune squared situation.

Today I looked up her birth data and she is a Pisces with a tight Jupiter Neptune conjunction in Leo opposing an Aquarius Moon, all square her Mars in Scorpio.

“She left some stuff out,” my husband said when he woke this morning.

“She didn’t get into the corners, there is stuff you deny.”

“Yeah and there is loyalty, I’m sure. You just don’t get rid of that regardless. She is going to keep some secrets but she did a good job. She put something very valuable on film.”

“Don’t know. Maybe I feel sorry for her too but if so, it is not the first thing that occurs.”

Traudl Junge died of cancer as the film was released. Shortly before her death she is reported to have said, “Now that I’ve let go of my story, I can let go of my life.