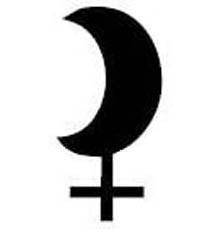 “Faith is an excitement and an enthusiasm: it is a condition of intellectual magnificence to which we must cling as to a treasure, and not squander on our way through life in the small coin of empty words, or in exact and priggish argument.”
–George Sand, pen name of the 19th century writer who dressed as a man (Black Moon Lilith in Sagittarius conjunct the MC)

Researching Lilith is a pain in the butt. There’s asteroid Lilith (#1181), the supposed phantom Moon, Dark Moon Lilith (that has never actually been discovered), and Black Moon Lilith, a theoretical point based on the orbit of the moon. Each position has its followers but as far as I can tell when most astrologers are talking about Lilith they are referencing Black Moon Lilith, the apogee (furthest point) of the moon’s orbit around the earth at a given time.

I really hope that was a good explanation. I took astronomy in university but it was at 8am. I am not a morning person. I did read the book though. In any case, the only Lilith I follow is the apogee Lilith, Black Moon Lilith. If you’re wondering, the Lilith in the additional objects field at astro.com is the apogee Lilith.

The mythology of Lilith is that of first wife to Adam. You know Adam and Eve, right? Apparently Adam’s first wife was a handful. She may or may not have given birth to a bunch of demons. She may even have been something of a succubus. Everyone’s got something horrible to say about the first wife, though, so let’s just concentrate on the meaning of the apogee point in the chart.

Lilith is often prominent in the charts of women who are noted for being direct and powerful, and in some way provocative. Lilith relates to the moon. It is the feminine shadow side of the moon. What society rejects as appropriate for the feminine, Lilith takes up. I find it interesting that Dita Von Teese has become famous not only as the former wife of Marilyn Manson but also as a burlesque dancer. Feminine, provocative, taboo, successful, Dita has Lilith as part of her stellium in Libra.

I see Lilith as the dark side of the moon. Like the moon, Lilith has needs, though not necessarily needs we like to acknowledge.

What do you think of Lilith? If you’re feeling bold (or drunk) how do you see your own Lilith manifest?

Should I Care About Black Moon Lilith?