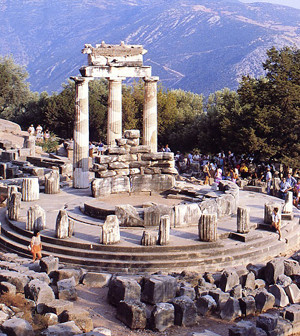 I just wrote a long, personal mail to my husband’s son in response to something he sent me. We are in an odd circumstance because our rising signs are just two degrees apart, as are our moons.  He is Libra is conjunct mine, etc. and as a result, we are often interested in the the same things at the same time.

Right now, we both have Saturn transiting the 9th house. I have the planet conjunct my Mars and Mercury and I am in court (9th) weighing what I publish (9th) and studying religion (9th) among other things. He has different planets in his 9th house but he’s doing somewhat related things.  For example he is in the middle of building a website he hopes will help others and we discuss that.

Today he sent me something interesting about the Oracle at Delphi. He mentioned priests and astrology and some other things along with it. This got my attention so I asked for his reference (I think he saw a documentary) so my husband and I could watch it too. We’re interested in him of course. Interested in what he is doing and what he is thinking.

Beyond that, I decided to tell him a rambling story (9th house) that has a lot of meaning so I typed it all out and when I was done I thought it should have a wider audience so I sent an unedited copy (full of my typos) to someone I felt would appreciate it because stories should travel, see?  9th house.

I ended my writing with a remark about priests, since he brought them up. I said:

“Last, I think priests are still pretty smart, by and large. As a worker, watching them work, they sure do a lot of it for people who people denigrate all the time.  Looks pretty selfless to me.

I got to thinking about this a few minutes later and I realized that I had offered my personal perspective (9th). Here:  “As a worker, watching them work…”

I think this is what is missing from what a lot of people offer up as conversation or discourse. They tell you what they heard that someone else thought.  They tell you what it is polite to say or what most people say or what their parents said to say, without ever running anything through their own independent filter.

This is a big piece to leave out.  Basically, it’s hard to be seen as knowing what you are talking about when there is no “YOU” about it.

I remember, HQ, telling me how he had worked through a problem that I was having.  He described his process and the (effective) solution he finally came up with. That’s meat, see? Real, tangible value.