Today’s Key Concept – Qualities
Another way to divide the signs is by quality. There are three qualities. Each one describes a basic modus operandi. Again, consider the distribution of planets, this time by quality. Take notice of an abundance or a scarcity of any quality.

The CARDINAL SIGNS are Aries, Cancer, Libra, and Capricorn. People with an abundance of Cardinal placements in their charts are leaders. They like to start the conversation, get the ball rolling, and forge ahead. They will do whatever it takes to initiate action.

The FIXED SIGNS are Taurus, Leo, Scorpio and Aquarius. People with an abundance of Fixed placements in their charts are not going anywhere! These people prefer to work from a solid foundation based on firm ideas of “the right way” to do things. Do not challenge them to a standoff.

The MUTABLE SIGNS are Gemini, Virgo, Sagittarius and Pisces. People with an abundance of Mutable placements in their charts are adaptable. These are compromising shape-shifters who mold themselves to whatever position is available as long as it holds their interest.

Note: Each sign has a unique combination of element and quality. See for yourself, no two signs have the same pair.
Link: Chart Element Modes 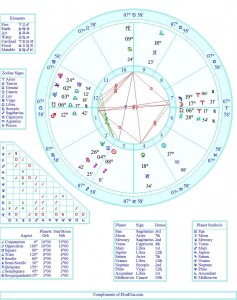 ASC – 7 degrees Libra
This is a Venus ruled chart, giving an overall pleasant air. Libra rising people are often accused of overt flirtation with intent to charm but no court would ever convict them, they’re too darn cute. Even the dowdy ones have that Je nesais quoi.

The Sun – Sagittarius in the 3rd House
This is a jolly Sun. Sagittarius lives out-loud with humor and grand thinking. In the third will make for a fact junkie. Will jump at an invitation to take part in an all night round of “did you know?” Will also bring beer.

The Moon – Aries in the 7th House
Another 7th house moon! This time in Aries. It should be noted that a Libra rising will always have signs in the house opposite the natural house. This flusters people when they are starting to read charts because it seems contradictory, the descriptions of Aries compared to the the 7th house, etc. But that’s part of the essence of Libra, it is balancing. Aries moon needs to be number one. In the 7th needs you to be number two.

Can you guess who else had this combination of Libra Rising, Sagittarius Sun and Aries Moon? 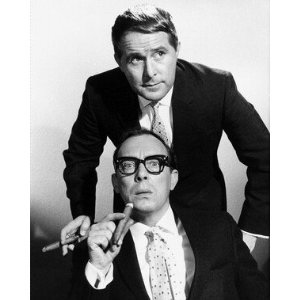 British comedian Ernie Wise! Also known as “the better looking half” of the duo Morcambe and Wise. He’s the one on the top.

First off I’m looking for the relationship between the Sun and the Moon. While the chart doesn’t show the aspect, I would allow for ten degrees between the two “lights” (Sun and Moon), particularly, as in this case, where they are both in the same element, here fire.

Even widely trine, these fire “lights” share a common energy. That’s some pretty good agreement and goes a long way toward working in concert. The ego needs and the emotional body don’t clash; they present at ease with each other.

The 3rd house Sun conjunct Mercury, in Sagittarius, denotes an active communicator. Neptune conjunct from Scorpio is where the fog rolls in. On the high side you could see an imaginative talker with deep stories. The low side might be someone who surreptitiously prevaricates, but with style. You can’t know how it’s expressed just by looking at the chart.

The Moon closely conjunct Saturn is a large defining characteristic. The soft Moon in close quarters with hard Saturn just doesn’t feel good. It restricts, slows down and the moon person feels it. Independent Aries particularly does not like restriction. This can manifest as not feeling good enough, or fear. The high side, however, can be someone who takes their emotions and matters of the heart very seriously.

Mars rising conjunct the Ascendant in Libra opposes the Aries Moon. Mars in Libra is not the most active Mars, but its position in the first house gives it more of a bite. For one thing, it’s right up front, part of the ASC mask. This kind of Mars may express as killing you with kindness, or they may very well be assertive in maintaining personal balance.

While the Moon opposes the Libra Rising, the Sun sextiles. The independent moon and the active, adventurous ego manage to relate a good deal. Because of the Libran ASC, they are likely to look pretty good while doing so.

And bringing it together, Dixie… 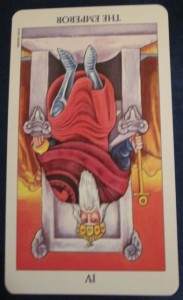 Your disposition is usually so pleasant, with your sweet and jovial qualities front and center, it can obscure the power of your emotional drives and the need you have to feel in control of what happens in your emotional world. In turn, It’s pretty easy with a 7th house moon to attribute the need to feel in the drivers’ seat in upon others. Don’t do it. Remaining aware will make it much easier for you to keep all your interactions fair (Libra) and generous (Sagittarius). Owning the need for control actually allows you to better maintain it.

It’s your turn. What do you see? Do you have qualities in common with the chart owner? How do you see the qualities manifest in real life? Let the questions and comments commence. It’s your workshop, after all, so have fun!