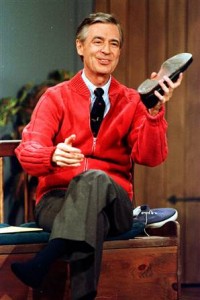 Last night on the boards Nota posted a link to Mr. Rogers’ 1969 address to Congress, “Mr. Rogers Defending PBS”. That video always makes me cry as Mr. Rogers was a strong, loving influence in my life. Fred Rogers was a Presbyterian minister as well as a music major before he embarked on his career in television. Minister and musician are two callings closely associated with Pisces. Mr. Rogers was a Pisces sun, with his moon, Mercury and Venus there as well.

His sun-Uranus conjunction in the 11th house is reflective of his ground-breaking message being distributed to the masses through the electronic medium of the day, television. His Pluto and IC in Cancer aspect his Aquarian Mars and Pisces moon. He certainly seemed to have the need and ability to transform the collective in a parental way. With his Taurus rising he appeared a solid and appealing individual.

Many of us intuitively understand why we love Mr. Rogers. I’m just as interested in figuring out why he loved us, so much. The Pisces stellium in outer houses stands out, but I think the salient point may come from the ruler of Pisces, Neptune. From 1963 through 1977, Neptune went from 15 degress Scorpio to 15 degrees Sagittarius, his 7th house, the house ruled by Venus, the house of the other. Neptune is universal love. Venus’ house is where he translated universal love into a one on one experience for each individual child. He told each of us he loved us and asked us to be his neighbor.

Mr. Rogers’ show first aired in 1968. Children under 6, for a very long period, all had Neptune placements falling into Mr. Rogers’ 7th house. He showed us universal love. He loved us.

Did you watch Mr. Rogers as a child, or have chidren who did? How did he affect you? Can you see the astrology?