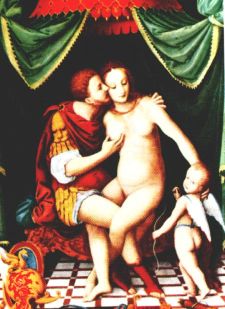 Here’s another for the current and jarring Venus (Women) in Aries (detriment) in aspect to debilitated Mars (Men) in Cancer. It continues this conversation re: the girl trucker… Venus Tempts Mars

“Yeah, I don’t know why men are so dumb but every single one of them think women are just standing on the corner waiting to give them pussy. Well, I’ve never seen it. No one ever just gives me some pussy. I don’t know. Maybe it’s my green beret training but if someone ever did try to just up and give me pussy, well that would be very suspect. I’d figure something was going on.”

Special Forces often use women to seduce men who are targets – another song as old as time that apparently works time and time again.

“Yeah, not once in my life have I just *got pussy. (Saturn square Mars) I have always had to work for it and work hard for it too.”

“I don’t remember that.”

“You call that work?”

Now I agree, I just like the boy but I know this attitude is not universal because so many form triangles in relationship so what about you?

Do you like the thrill of the chase and competing against others for love or do you just want the love?