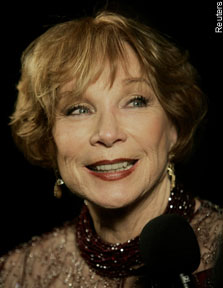 Taurus Shirley MacLaine has proven herself to be a great actress as well as singer, dancer and writer. Besides her great career as an actor, Shirley has written many books about spirituality and reincarnation. With her Sun and Mars in the eighth house trine her rising, Moon and Neptune in the 12th, Shirley has a deep personal interest in new age subjects and writes about it. With such an emphasis on the 8th and 12th houses, Shirley would question the deeper meaning of life and be interested in all things regarding life, death and religions.

Shirley started working very young as a dancer on Broadway but soon signed to act as she was too tall for a ballerina, over 6 ft. on pointe, and was told she lacked the dainty feet needed for a ballerina. Shirley would continue to dance, however, and convert her education in ballet to jazz so she could dance on stage and screen.

With Virgo Moon and rising, Shirley has been a hard worker and it has paid off for her in spades. Shirley has Mercury and Uranus in Aries and Saturn in Aquarius. Shirley’s chart has artistic Pisces Venus trine her Pluto in Cancer. With Cancer in the tenth house trine Pisces Venus in the sixth, it is no surprise that Shirley would work in the public eye to bring spirituality to the people in her books. Outspoken about her belief in reincarnation, Shirley has done interviews and book signings as well as readings promoting her studies and books on the subjects of past lives, astrology and other subjects dealing with spirituality. Shirley has traveled and done great research on spiritual subjects and we see in her chart why this became such a great interest in her life with the houses and placements in her chart.

Shirley is an Academy Award winning actress for the film “Terms of Endearment” and has done some great film roles over the years in films such as “Irma la Douce,” “Steel Magnolias,” “Postcards From the Edge” and “The Turning Point,” where she played a retired ballerina much like herself. With a Gemini Midheaven, Shirley is able to take on character and her Midheaven is trine her Saturn in Aquarius in the dramatic 5th house. Shirley won the Golden Globe for her breakout role in “The Trouble With Harry” at the beginning of her career. Shirley’s bestselling books that deal with her spirituality and that of other’s have done well for her and a couple that stood out for the public were “Out On A Limb” and “Dancing In the Light.” She also did a film in which her character was interested in New Age beliefs called “Defending Your Life,” with Meryl Streep.

Shirley’s career has spanned decades and she will appear in a film called “Poor Things.” Shirley also had a very short lived sitcom called ” Shirley’s World.” With so much Virgo in a Taurus Sun chart we know that Shirley is a hard worker and she kept her dance chops up for a very long time. Strong in her beliefs showing in her strong 8th and 12th houses, Shirley will most likely continue her search for her own set of spiritual beliefs all her life.

Shirley’s style is on that has not changed over the years with the exception of her dressing which went more to the side of color and expression as she delved into New Age belief. Shirley has her trademark red hair most of the time in one shade of red or the other in a style that would suit a person who worked hard and didn’t have the time to style her hair in any elaborate way each day. There have been times when Shirley has had a shade of brown hair for a role but her red hair is what she is best known for. Red hair requires a strong personality and Shirley would have one being a Taurus. A pixie cut or shag have been Shirley’s trademark hair through out her career and she has not been afraid to play age appropriate roles on the screen and be “real” about who she is as a person.

In the beginning of her career Shirley dressed much like a dancer in leggy dresses and shirts that flowed in black with black jackets and black being a strong color in her wardrobe. As Shirley began her study of other belief systems she changed her look to reflect that while staying true to the Taurus love of luxury in fabric and feeling comfortable in clothing. Shirley wears all colors now and favors shades that are softer than black staying with the Neptune colors of blue and green often. She wears flowing pants and skirts whether long or short. Knowing more about herself and knowing what colors affect her, no doubt, have influenced Shirley’s style, I think, for the better and made her look more friendly and approachable.

Shirley has cute and small features that work with shorter hair and she often lifts it on top to give her face a more valentine shape that is attractive on most people. Given her Gemini Midheaven and tenth house, Shirley often photographs with a big smile on her face or in a character mode, not unusual for a trained jazz dancer or someone who takes on character with ease. Unlike many actors that attempt to put drama into their look, Shirley smiles at the camera with a friendliness and happiness that she credits to her new found reality after studying spirituality. She claims to have found great happiness in her New Age studies in her books and it shows on her face and in her mannerisms.

Again, Shirley is set to appear in another film soon so we know we will see more of this talented actor. Knowing how committed she is to her studies of reincarnation and such, we might see another book or documentary from Shirley in the years to come. What are some of your favorite Shirley MacLaine characters?