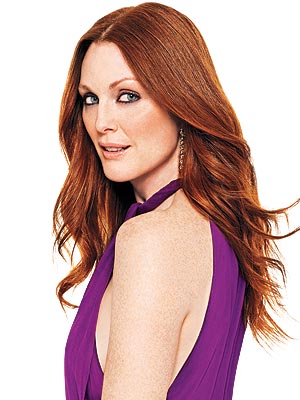 Hardworking Julianne Moore is a Sun sign Sagittarius with both Moon and rising in Gemini. Communication would be foremost for her and she does so with great talent. She is also a very hard working actress with much earth in her chart to keep her grounded as she takes on role after role making them believable with the love of character assigned to Gemini influences.

Julianne’s Venus, Saturn and Jupiter are in Capricorn. She has slowly but surely built a strong career for herself while taking more and more chances on roles that grow more challenging as she becomes more sure of herself. Her Pluto and North Node are in Virgo in the 4th house giving her a hardworking base. Julianne is an Army brat whose father was a military lawyer, judge, helicopter pilot and colonel. This kind of childhood would teach her the rewards of hard work and force her to learn to communicate well when changing residences often. Her Sagittarius Sun would be served by moving around and seeing different cultures and places in the world. Julianne would have had to work to make a home each time her surroundings changed and having so much Gemini to draw on would help her first to make friends in new places and later to draw on experience to create character as well as she does. If you notice, Julianne took harder and harder roles as her career blossomed. She would be a hard worker and a climber with so much Capricorn and also responsible to her career and putting it high on her list of priorities.

So much Gemini and having a Sag Sun would cause Julianne to bore easily when it comes to taking scripts so if we look at her history we can see how she has changed up her game and taken on better and better roles. She began with waitressing before landing a role in a soap opera that brought her an Emmy. She began to branch out into early roles in movies like “The Hand That Rocks the Cradle,” and “Benny and Joon,” working her way to later roles like “The Hours,” and “Children of Men,” which required harder character development. Julianne is a working actress not satisfied with being pigeon-holed into a certain type of character. This has to be due to her ever growing interest in doing new things and gathering of information that Sag and Gemini are known for. Her hard work ethic is due to her earth.

In her personal style, Julianne is not afraid of her sexuality and her body. She is comfortable in her skin with both Mercury and Neptune in Scorpio, Mercury being in the 6th house of work along with her Sag Sun. She will apply skin revealing clothing when the role calls for it for character development and uses her sexuality in a well thought out way. She has been photographed in some very tasteful shots that reveal much of her body but she appears comfortable in them and that would be due to her work ethic being applied to her Scorpio placements.

Julianne has that red hair trademark that has served her well. Uranus is in Leo in the third house. That red hair is her trademark and separates her from the crowd but also allows Julianne to wear color that some actors cannot because the red hue in her hair allows for color play that is unusual. With her Leo Uranus in the third house, unusual would be a keyword and she does use that hair color in the very best way. A redhead with light skin can wear black like all get out and she does wear black very often. Her hair and skin look stunning in green, of course and she has worn green often on the red carpet. Julianne takes carefully thought out chances on the red carpet and in photos, even finding that orange can be worn with red hair if it is in the burnt orange family. Julianne can wear a jewel tone blue very well also with her coloring and hair. Her Mars is in the first house also giving her guts to go for it in life but also explaining the busty shots that Julianne has taken and the low cut gowns she is known for. Cancer will always go for the bustline in clothing and Julianne is no exception looking stunning in her cut “to there,” gowns that accent her top half. She has great bone structure and shows it to the best degree in gowns that are cut low in front. She also has shown her back in deep cut gowns but those gowns are almost always done with a low cut front and styled to accent the bust. Julianne puts as much thought into how she presents as she does to her career and it works for her most of the time. She has not shown up on anyone’s “worst dressed,” list and done so with red hair which is not easy. Most actresses in her position would have blonde hair by this stage in their career but Julianne holds strong with the beautiful redhead look that has served her so well.

With this work ethic and her curiosity we can expect Julianne to find more and more roles she can work that become more interesting in time as she searches for more inspiration. There is no question she can read a script with planets in Sag, Gemini and Virgo and reading scripts and choosing the right ones are tantamount to an actors success at this point in her career. I expect to see more of Julianne in the future and in films we will want to watch.