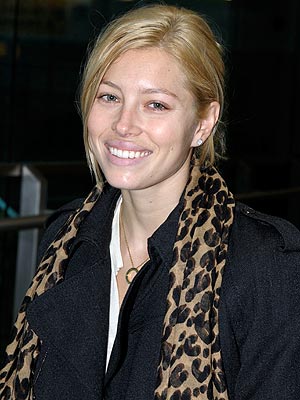 Model turned actress Jessica Biel is a Sun sign Pisces with a chart complicated by a host of planets in air signs. Instead of the “sweet, caring, demure,” Pisces we have a woman with vast interests and whom is not comfortable being pigeon holed into one character despite her long running role on television in “7th Heaven.” She has tried action flicks and drama as well as comedy.

Jessica’s Moon is in Gemini and she has a stellium of planets in the sign of Libra. Still, instead of the lady like qualities of Libra and the urge to work with a partner, Jessica has Mercury and Venus in Aquarius causing her to think outside the box in her modeling career as well as her acting career. She appears, purposely, in different roles to take herself out of the “good girl,” image she felt firmly placed in while in her series. Jessica, with Pisces sun and Gemini Moon would be interested in character and would, indeed, seek out those characters that would be reaching, (Aquarius,) far into other areas of the human psyche.

Jessica’s style is not one of keeping her clothes on and being prim or proper like some Libra influenced performers have shown themselves to be. This is due, I feel, to her Aquarius placements, especially Venus which has a lot to do with our dressing and art styles. She has appeared in ads where she is wearing very little and has done roles in very body conscious outfits. This is her need to take on character in both style and career. To boldly go where she can to learn more and take on more intense roles has been her stated goal. This is consistent with all of the air in her chart. Her Pisces Sun is well suited to her character on “7th Heaven,” and then Jessica takes us other places in her choices and shows us what she is made of.

Biel is light skinned and varies her look as would a Gemini moon with Aquarius Venus from the tanned skin sun goddess to the light skinned, shimmering pastel wearing vision. When one has blonde hair the change between the above styles has to do with tanning and having low lights or high lights in one’s hair. If one is blonde, highlights give a feeling of shimmer and help one shine in pastel and glittering clothing. She wears gowns when out to events and has appeared in this look. With lowlights in her blonde hair and a tan on her skin she can appear in black and not look harsh as well as do shoots in bikinis which she is known to do. One of the easiest hair colors to alter and help alter one’s presentation is blonde because one can go light or dark depending on the look they are seeking at that time. Jessica keeps her hair in a longer form so it can be worn up or down and help her take on character with a change of hair style. Many of these tricks are done constantly in Hollywood and on the stage to help an actor achieve a certain feel. To appear more lady like and demure all one has to do is take their blonde hair to a dark brown and there we have the “girl next door.”

Jessica wears a lot of white and to do this she keeps her blonde hair a dark blonde and usually has a tan. This also helps her to wear black. Still there is a “Jessica,” that shimmers like a Pisces that we sometimes see and I’m sure she is comfortable in that look. In her off time Jessica wears jeans often enough and the “uniform,” of jeans and a soft T or sweater and scarf. Because of her Gemini Moon she also favors hats which many Gemini’s do for the change they provide in a heart beat and for days when one is just not into doing one’s hair. A Pisces will often wear their hair long and loose and use a hat as well when they are in their meditative mode and cannot be bothered to deal with hair.

Jessica’s rising is as of now, unknown, so we cannot surmise anything from that but we do know that this is a Pisces woman with a world of intellect given the planet placements in air signs. However, Mars is in Libra and Venus is in Aquarius so we can be sure she will always be lady like in her search for new and interesting roles to play!