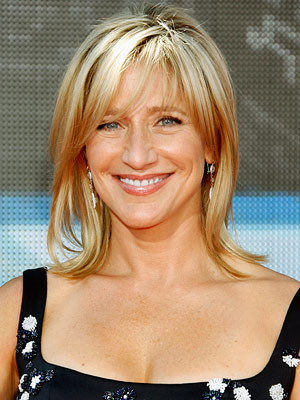 Most famous for her wonderful work in the “Sopranos,” Edie Falco is a Cancer with Mercury in Cancer as well. This interesting Cancer has Mars, Pluto and Uranus in Virgo making her a very hard worker and Venus in Gemini helping her love character acting. She has won many awards for “Sopranos,” and also appears on the Broadway stage. The stage is hard work and required great commitment and having a stellium in Virgo would be ideal for this kind of work.

A Cancer loves family and Edie had a great family in the “Sopranos,” and is building a great family in her next television show, “Nurse Jackie.” She probably excels at bonding with cast members and is probably an “actor’s actor.” With all that hard work and Venus in Gemini her artistic self would be interested in character acting which is what she is excellent at.

Her Moon is in Sagittarius causing her to seek out interesting roles and those set in different environments than what she is used to. The lifestyle that was “Sopranos,” must have been very interesting to Edie as she could explore a different lifestyle than her own in great detail. She played the hell out of that role and was recognized by critics all over.

Whenever we see Sag and Gemini in a performers chart we see a love of character acting and a need for different roles that bring them into different walks of life. Being a nurse is a new challenge and probably one that Edie loves and finds interesting. The character of “Nurse Jackie,” is not a perfect person and has flaws but is humanitarian and we can see a bit of Edie in that character. Not only does her Virgo stellium work in the area of health but she is able to enter a different world to satisfy her Sagittarius and focus deeply on character to interest her Gemini placement.

Edie’s Jupiter is in Aries bringing creativity and fearlessness in tearing into a role. It fits with her Sag Moon and probably adds creativity to everything she does. Her Jupiter magnifies her personality and this would work well for the stage when she works on Broadway. An actor needs a big presence to work on Broadway and with a Sag moon and Aries Jupiter we know that Edie has that personality that is needed in spades. Edie’s ability to play the rough edges also helped her in a role in “Oz,” which is another critically acclaimed series. We have to assume that Cancer Edie prefers the family and security given to one who is in a series as well as the regular paycheck. The theater is also a family atmosphere and she would do well there too, feeling at home in a family.

At one time Edie had trouble with alcohol and said that the cast of “Sopranos,” would love to gather for drinks after a hard days work and she had to stop attending these parties to honor her sobriety. We can see that her fire in her chart could cause her to go head on into a hard partying way and her Cancer, needing security, bring her back to the safety of sobriety. She was honest, however, about this as well as her bout with cancer and we can expect this with someone with strong Jupiter in their chart. Edie is also politically active and this is not uncommon with those with strong Jupiter.

Edie has begun to win awards for her series “Nurse Jackie,” which many said would not work. It has been good to her and proved to be a role she can win awards for as well. Again, any character is right up Edie’s alley and she would put herself into it completely and form bonds on set and with directors. The edgy part of the character she portrays on “Nurse Jackie,” requires a realness which I believe Edie delivers in each performance she becomes involved.

Edie’s look when appearing at events is one that appears likeable and friendly as well as interesting to know. Being a Cancer she is a dress girl and appears in all sorts of colors, even polka dots, (Gemini.) She is casual with her hair and make up and never goes over the top, (Stellium in Virgo.) She wears her hair in a natural style and her make up is believable and made to enhance her natural features. I believe that this is also due to her large amount of Virgo and her comfort loving Cancer. Still she livens things up with her choice of dresses in different colors and prints. (Gemini and Sag influence.) Like a Cancer, she appears as everyone’s best friend and probably does have a lot of friends in her community of people. Gemini and Sag love friends and Edie has the face of one whom you could like right away and looks approachable. She has made her decision to be a character actor so she needn’t appear sexed up on the red carpet and she does.

Edie’s hair cut works for her so well. Her hair is casual enough to please all that Virgo and avoid fussiness but interesting enough to show us a bit of fire from her Jupiter and Sag placements. Her hair moves and shows interesting high and low lights while staying “every woman.” She has a great style for an actor looking for work with many different areas of life being portrayed. The length of her hair is the most practical, (Virgo again,) for it can be put up or worn down but is not too long so that it needs huge care. Her hair cut can be wash and go or set and styled and that is perfect for a character actor and someone who wants to reach out to everyone as a Cancer often does. Her face literally lights up with character when we see a photo of her and this is her Aries Jupiter and Sag Moon working together. Friendly is the look we get from Edie and I believe it suits her personality and chart.

Edie has another hit on her hands with “Nurse Jackie,” but with all the awards she has won for Soprano and now winning one for “Nurse Jackie,” I believe we will see Edie on the big screen a bit in character roles. She has the chops for screen and has done Broadway so she is prepared to branch out into movies if she chooses However, since she loves a family about her she will probably embrace “Nurse Jackie,” and play it out being as she is in her comfort zone as a Cancer woman.