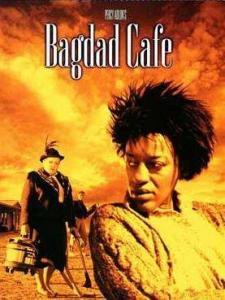 Do you even know there are tags on this blog? There are almost 10,000 posts here, all of them are tagged. My favorite tag, just right off the top of my head would be movies. I just flashed on the idea if I were to go back and read all the movie posts I would probably be happy. Next I thought of Bagdad Cafe.

If you’ve not seen this movie and decide to, I doubt you will be disappointed. It is one of my favorite movies of all time.

It was Claire-France Perez who told me of it. She sees me (quite correctly) as a very Mars-y woman and there is a gal in this movie she thought I ought to see. She is black and angry and does things very familiar to me, like toss out men she loves; she kicks cans and vehicles, she threatens to shoot people and many other things that amuse me. I got the movie and enjoyed it very much.

A couple years later, Scott watched the movie. For newbies around here, Scott was my boyfriend on and off for 17 years. We met when I was 15, he was 17 and I was working in his mother’s bar. We had a big falling out after almost 20 years of off and on and did not talk for about 10 years before he resurfaced and we were in contact for 3 or 4 years before the next meltdown and separation which is ongoing. In whatever case he watched this movie and called me excitedly to tell me he’d never seen a character I had more in common with. But get this: It was a different character!

Scott did not equate me with the black woman (Brenda) at all! He thought I was the white woman (Yasmin) who comes walking to town from the desert which of course is exactly what I did when I was a kid.

Yasmin has to go through all kinds of horrible shit but manages to transform everyone she meets and boy was this a Neptune lesson to me, ya think?

Personally, I can see myself in either character. I don’t mind either association. I’d be proud to be either of these women – See the movie.