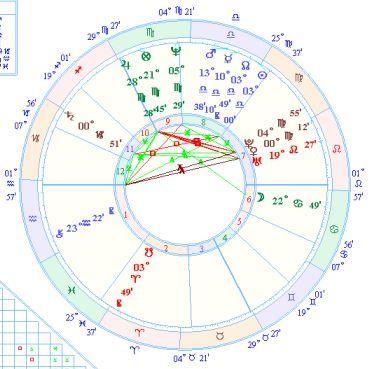 I was going through my old docs and found a transcript of a class that I taught on chart-reading in 2003.  This was one of the charts I used. I called it, “Abused”.

“She says she was singled out for abuse in her family. The scapegoat. She wants to know why.

I may take some heat for this ala “blame the victim”. If I do, it’ll be because I’m misunderstood. In whatever case, I can take it.

Fact is, we come into the world and we already have energy. We already exude something. If you have ever been present when someone is born…well the air changes when the person comes into the room. This is not some innocuous blob being born. It is a complete human being, albeit in raw form.

Now here’s a little fact. Some kids are more likely to be abused than others. This is primarily because their energy in provocative in some way…”

I went on to delineate the chart.  But what do you think of this idea?

I used to date a Scorpio, with Venus, Mercury and Saturn in Scorpio as well. His stellium was in his 8th house. I have a stellium in my 8th house as well.

There was a little girl who lived next door. She was also a Scorpio. Her energy struck us both.

We both thought she was at risk and someone had better be watching her very closely.

Know anything about this?