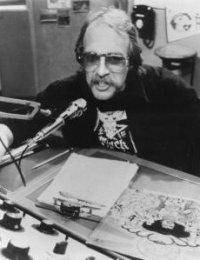 “So just sit right down, relax, open your ears real wide and say, ‘Give it to me straight, Doctor, I can take it!’ oh I almost forgot, fellow babies… booooooooooooger!”
–Dr. Johnny Fever, WKRP in Cincinnati

In adolescence young people look around and begin to identify with people outside themselves and their families, often incorporating others’ traits. Celebrities and characters in all types of media are ripe for these associations and are seen as archetypes, the personification of universal ideals. Identifying with archetypes is a way of making the universal personal, of saying, “this is me,” both to yourself and the world.

When I was a kid, Dr. Johnny Fever was a character on WKRP in Cincinnati, a popular tv show. I was so very drawn to him; I thought he was sooo coool that I wanted to dress like him, be smooooth like him. As an adult I look at the character and laugh at the fact I wanted to be like a middle-aged, scruffy slacker. But I did, so WHY?

Johnny Fever is perfect personification for my Scorpio Mars and 8th house planets, underground and dirty, just a bit salacious and sometimes secretive. He’s neptunian as well, drinking and often clueless. Being a popular rock DJ appealed to my Leo rising. The actor who plays Fever, Howard Hesseman, also happens to be a Pisces with a Capricorn Moon, just like me. Johnny Fever’s appeal was two part: he gave me someone to loosely model myself after and helped me accept in myself those traits I already embodied.

Do you see yourself in characters in entertainment or literature? What’s the astrological link?