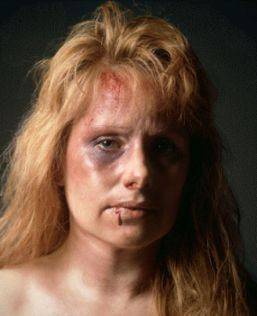 My sister is dating a man who is physically and emotionally abusive. He has hit, shoved, pushed and slapped her. He has called her names, made her feel ugly, and worthless. He cheats on her openly and unapologetically.

Once he even got my sister to unwittingly aid him in helping a murderer flee the country, by telling her they were driving him to the airport so he could go home for Christmas. No charges were brought up against the boyfriend for aiding the perpetrator because he cooperated with the detectives. So much for justice. All my sister can do is defend her boyfriend for helping this evil man.

Needless to say, my family is up in arms. We have all tried to extract her from the relationship; we have lent love and support to her endlessly. We have tried to get her counseling, we have tried talking to her, we have tried everything, yet she continues to makes excuses for this bastard.

The only advice I have gotten is to let her make her own mistakes; let her do this her own way, because I cannot change her. I understand that but – only problem is that she is my sister, and I love her, and I am afraid he will end up severely injuring or possibly killing her.

They say that many women who gravitate and stay in abusive relationships do so because they have a weak support system or feel as if they have nowhere to go, but my sister has a VERY strong one. Me, her friends, and her entire family (including aunts and uncles and cousins) have all lent support, money, places to stay, and of course, lots of love and understanding.

My sister is now trying very hard to burn her bridges with us all. She ignores us and is rude to us. None of us fall for it; none of us take the antagonistic bait. We just continue to love her. We have even backed off about trying to get her to stop seeing him, so that she doesn’t have to feel defensive all the time.

With all that said, I’m at a complete loss. How can I sit back and let my sister be physically, emotionally, and spiritually harmed this way? I understand I cannot change her. But DAMN, I can’t sit back and let her be killed or hurt!

I am terrified that before I know it, I will be doing the eulogy at her funeral… how can I let this happen to someone I love?

I feel sorry for you. Your problem is horrendous and I would like to have some kind of neat trick to fix but I don’t think that one exists. Now I hear you loud and clear. You are afraid your sister is going to die and obviously your concern is valid but I have worked for the National Coalition Against Domestic Violence and am afraid what the others have told you is correct. You cannot help a battered woman who does want your help.

So what I’ll try to do is give you information that might will allow you to see this. Because as it is… you are too close in and too attached to be objective. So please forget your problems for minute and focus on this other woman that I am going to make up.

Meanwhile he’s not worried at all. He’s just living, you know. Like your sister. And though this wife is correct (her husband is on a crash course), this is the point to get:

The sooner they crash, the better. And I know this is counterintuitive but it’s a fact. If your sister has any hope at all, she has got to hit the wall and you are not helping her when you take steps to prevent this. Because things like this progress! They get worse. So if your sister hits bottom in a week, there will be less damage than if it takes her five years. And if you can understand that you can see that slowing this process is not in her best interest. And if you pull your support, do you risk her life?

NO! Her life is already at risk, wouldn’t you say? You hovering over her is not working. It might have worked, except it didn’t, so now you have to try something new… as does the wife of the alcoholic.

If she quits supporting this guy might he drive his car off a cliff while impaired? Well, yeah. But he was already going to do that. On the other hand if she leaves him alone in the dark in his room with nothing but his bottle… well just think about it. Which tactic do you think is going to get him to treatment faster?

Same with your sister. She’s got her whole family worried sick about her. But what if every single one of you told her, “Look. We love you, but we are not going to watch this guy kill you. We are not going to witness this for the sake of our own psyches. So we’re going to walk now. And if you decide you want help to get out of this situation… well it will be there. But until then, don’t call us…”

This may be the hardest thing you might ever do, but I think it’s your best shot. So this is my advice, with one more bit.

I also recommend you take this outside the family, like you did when you wrote me. Call the battered women centers and talk to the experts because they are incredibly knowledgeable and you are just too close to this situation to look at it in a clinical way and they can help you with that.

When women like your sister call the battered women resources and want to talk about what he did last night, they ask them if they want to leave. And when they say no, they tell them to call back when they do. And then they hang up!

This is like listening to the alcoholic tell you about his hangover. “Call me when you want to get sober, babe. Till then you’re on your own…”

Yep. Sometimes people die. But if you want to raise the odds against that, this is how it is done.