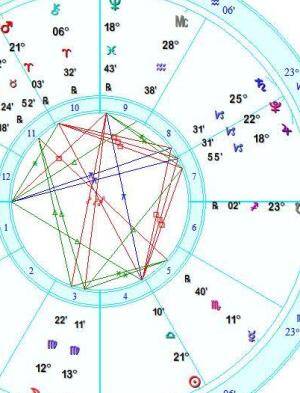 I expected September to be outrageously, deeply complicated, particularly in the area of communications. Deeply Meaningful Machinations. I wasn’t disappointed!  Everything has multiple angles and levels of depth. We’re going to be a long time, trying to figure out what all happened here.  It’s also been painful!

I posted this, ten days ago. Time for an update.

Mercury in Scorpio is now opposing Uranus in Taurus.  Talk about puking it up!  Chunks are flyin’ all over the place.

Meanwhile, Jupiter and Saturn in Capricorn are now direct. Pluto will turn direct this weekend.

Many are dealing with the cold (Pluto) hard (Saturn) truth (Jupiter). I wrote about this but had to remove the post due to the upset it caused.  It’s not about being squashed. It’s necessary to be responsible.

Lives are changing at this time. Irrevocably.

The Mercury Uranus opposition will dominate this next week. Shocking, disturbing news. Lots of it. Details here.

Next week, the Cardinal T-square shown in the graphic will take over.  It represents tremendous pressure; October 9th – 20th. I saw this coming a year ago, and posted in the forum. It will pack a punch.

Notice the planets that make up the stellium in Capricorn are all direct… which means they are not going backward!

This has been another theme in my work. Look ahead because we’re not going back. There is no “back”.

I’ve been saying this for a few years now. Pluto in Capricorn – Consolidate your losses (and gains).

How are you faring?